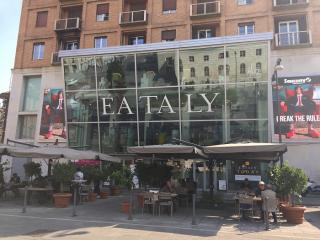 The double sliding glass doors at the entrance of the Eataly store in Milan, Italy, look like the doors to any other U.S. grocery store. But step inside and the similarities end. Eataly is one of the originators of experiential retail and its grocery stores, if they can be called that, don’t look, sound or smell like the typical American supermarket. It is a theater for the senses where the starring attraction is food and supporting roles are played by quality, service and presentation.

The theater metaphor is appropriate because Milan’s Eataly, the flagship of the booming Italian food retailing chain, is housed in a converted theater. The building’s 55,000 square feet span four levels with a large central atrium that add to the theatrical presentation.

In late 2017, Retail Leader visited the distinctive concept, which should be on the itinerary of every retailer wrestling with the challenge of ensuring their physical spaces remain relevant to increasingly digital shoppers. More often than not, the solution to doing so, especially with food retailers, revolves around elevating the store experience to give shoppers a reason to want to visit a store.

Shoppers want to visit Eataly, which is why even on a mid-morning in late September the Milan location is quite busy. Italian, Spanish and American pop hits from artists such as Miley Cyrus and Enrique Iglesias fill the air and shoppers are greeted by a sight now rare in the United States: walls and walls of books, all related to food.

Eataly Milan, the largest store in the chain, has three floors dedicated to fresh food, dry grocery items, beauty products and household goods, plus 20 casual restaurants focused on variants of Italian cuisine. The fourth floor of the building houses areas for administration, workshops, meetings and presentations.

Each floor has grocery and restaurant areas, as well as production areas for cheese, bread, sweets and hot food.

The store is arranged in a way that allows fluid transition from supermarket to restaurant, to cheese shop to wine bar. This fluidity contributes to the overall store experience, which makes Eataly a destination for foodies, the epicurious, local residents and chefs with exacting standards.

Walking into the main part of the first floor of the store, one is mesmerized by the natural light pouring in from seemingly all directions. To the left, stacks of organic sundried tomatoes in glass jars and cans of certified authentic San Marzano tomatoes were value priced at less than two euros for a large can.

A cookware section led to a bakery featuring rolls studded with pistachios and olives. To the right, tourists wearing Nike T-shirts and Italian businessmen ordered gelato, coffee or pastry from one of the four walk-up foodservice counters. From the looks on the faces of shoppers, the aromas of butter, coffee, cheese and pizza were irresistible.

The retail formula for privately held Eataly appears to be working. The company has been expanding globally since the chain was born in 2003 and now operates 34 locations. Next up for the Farinetti family that founded Eataly: the world’s first food theme park, in the northern Italian city of Bologna

When Eataly opens in a city, be it New York, Chicago or Boston, it occupies a special place few retailers are able to achieve: a destination for locals as well as a tourist attraction. The Milan Eataly attracts more than 5 million customers annually, according to the company. Shoppers devour the experience so much so that Eataly’s customer service department is staffed by employees at the ready to ship merchandise to customers’ home countries.

The appeal of the store is everywhere and a first time visitor immersed in the experience quickly loses track of time. For example, browsing the book aisles leads one to the center of the first floor, where the produce section beckons. Artichokes, lettuces, cucumbers and a spectacular array tomatoes so incredibly ripe and perfect they almost don’t look real. Produce is presented in baskets positioned on movable carts. There is no harsh fluorescent lighting, misters or refrigerated cases common in U.S. product departments. The presentation is clearly not driven by supply chain considerations common in U.S. grocers who rely on reusable plastic containers to replenish displays. Rather the intent is to give shoppers the feeling of buying fruits and vegetables from a cart at a local farm. It’s a strategy that seems to appeal as shoppers ogle and select items. One woman picked up a bunch of parsley, sniffed it approvingly, and wrapped it in brown paper before paying at one of numerous checkstands integrated into the department to complement a central checkout area near the exit.

At every Eataly store, shoppers can find fresh produce, meats butchered to order, several bakeries, seafood, freshly churned ricotta and mozzarella cheeses, cooking utensils, cookbooks, wine and Italian culinary products. The goal is to show shoppers that high-quality products and a high-quality food shopping experience are available to everyone.

At Eataly Milan, shelves holding products, from canned tuna to pasta sauce, all have large labels explaining the origins of the foods: from the ingredients, to where the item was made, to the reasons why Eataly chose to sell the product. This practice isn’t unique to Eataly, as Whole Foods and Walmart are known to call out with signing the origin of locally source items. However, Eataly takes it a step further and enjoys the benefit of being able to tout authentic Italian items. For example, a huge assortment of oils easily twice the linear footage of a typical U.S. supermarket, is labeled by category (olive, walnut, etc.) and region. There’s also a map of Italy showing the different regions where the oil comes from. An olive tree in a planter near the wall of oils lets shoppers know what kind of olive was used to make a particular oil.

Authenticity abounds at Eataly because food is arguably Italy’s greatest contribution to the world. Shoppers fill their carts with fresh baked breads while they lick hazelnut chocolate gelato from cones baked in-store.

Eataly stores don’t conform to the rules of category management, at least not how it is practiced in the U.S., with rows of shelves divided into two, four or eight foot sections and logical adjacencies. At Eataly, it is common to find jars of capers and pesto merchandised next to the latest Taylor Swift CD and fragrant soaps made with Italian olive oil.

There are lots of jams and jellies to choose from, and there is a 20 foot tall fixture from which Italian chocolate cascades and fills the air with an aroma irresistible to chocolate lovers.

On the second and third floors of the stores the hedonistic food experience intensifies. Meats and cheeses take center stage with Eataly offering conventional cuts as well as dry aged beef displayed in a glass cooler. There is an eight foot wide refrigerated case devoted to just mozzarella. A rotisserie and hot food bar has plenty of tables and chairs next to a large stage where the store hosts chefs, musicians of all genres and civic leaders.

An Eataly employee walks around offering samples of roasted pork on a piece of bread sprinkled with olive oil. There’s more CDs and more books and lots of cured meats — prosciutto, mortadella, bresaola. A young woman asks how much the truffles cost. She gets her answer, and keeps walking.

A wine shop leads to several restaurants specializing in pizza, seafood and steaks. Cookbooks, cookware and apparel surround displays of electric mixers and fresh Italian melons. A man in a chef’s uniform is making mozzarella from scratch behind a glass partition and he is narrating the process into his microphone. As he stretches and sways the long pieces of curd, this traditional way of making cheese is showing on flat-screen TVs all over the store and adds to the theater element that is Eataly.

As the U.S. food retail industry undergoes dramatic change with sales expected to migrate online at an accelerating pace, retailers intent on hanging on to store traffic are rethinking the idea of what makes for a compelling grocery store experience. Eataly has done that, and then some, by redefining the entire concept of a food retail store in a way that simply doesn’t exist in the U.S., with all due respect to operators such as Wegmans, Whole Foods and H-E-B’s Central Market.

A few retailers have played around with fancy lighting and unique food presentation. Some grocers have taken the items on their deli menus and paired them with beer taps and high top tables. Other stores have opened restaurants and brought in chefs. But many times the concepts often times have fallen flat, because they lack authenticity.

Food shoppers are more savvy and have more options than ever before and they want quality at a fair price. They also want the ability to buy online and pick up at stores as is evident by the rapid expansion of click and collect service from the likes of Walmart and Kroger.

Eataly is all about experience and very effective at conveying to the shopper that it cares about the products it sells, that it cares about quality. The store reeks of authenticity, from the quality of the pizza dough to the smells from the seafood counter to the personalized service: Eataly has really created a perfect mix of globalization (global sourcing of products) and localization (a personalized shopping experience), which really speaks to where retail is going.

The idea behind Eataly is very simple: gather quality foods under one roof, where you can eat, shop, be entertained and inspired all at the same time. While Eataly is all about experience, the retailer doesn’t have its head totally in the sand when it come to digital matters. Large signs on multiple escalators throughout the store alert shoppers to the Eataly web site and the retailer’s digital capabilities. Shoppers could avoid coming to the store and have products delivered the same day, but why would anyone want to do that given the two-thumbs up sensory experience Eataly offers. RL

The retailer is opening the world’s first theme park dedicated to agriculture and food production in November in Bologna, Italy. The park is set to include restaurants, rides, farming factories, more than 100,000 square feet of food retail space and classes.

From field to fork, FICO Eataly World (FICO stands for Fabbrica Italiana Contadina, or Italian Farming Factory) will invite visitors to learn about — and experience — the behind-the-scenes creation of food and drink. Entrance to the park will be free. The company says it wants visitors to think about everything they eat, which affects suppliers, retailers, the environment and beyond.

Covering 20 acres, Eataly World is opening in partnership with more than 2,000 suppliers. The park will house four acres of pastures, fields and farms dedicated to growing essential crops and raising indigenous animal breeds.

Above all, Eataly says Eataly World will be a place of learning, with 10 classrooms, 2 miles of educational paths, and six multimedia areas that all educate consumers about agribusiness.