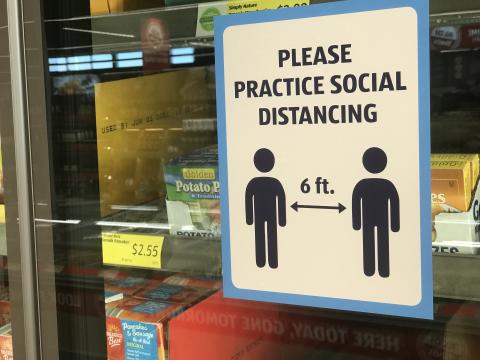 Aldi reminds shoppers to maintain a safe distance from other shoppers, but doesn't restrict the number of shoppers it allows in stores.

Since mid-March, the retail industry has steadily escalated efforts to slow the spread of COVID-19. There has been a drip, drip, drip of ever more rigorous measures and suggestions directed at shoppers to behave a certain way. The latest wave of measures from most retailers involve steps to ensure better compliance with public health officials social distancing recommendation to maintain a six foot gap from others.

In reality, this is virtually impossible in most retail stores, especially those operated by food and consumable retailers, where aisle widths were based on shopper traffic and service level expectations, not infectious disease mitigation. To improve the odds of shoppers maintaining an appropriate distance, one common approach has been to regulate the number of shoppers allowed in a store at any given time. Walmart, Target, The Home Depot, Trader Joe’s and countless others are doing this. These efforts are aided somewhat by the fact that after a month of stock up behavior shopper traffic has lessened.

Increasingly, retailers are recognizing that the weak link in their efforts to slow the spread of COVID-19 is the configuration of stores. Even in retailers whose aisle widths are larger than average it is impossible for shoppers who meet one another in an aisle to maintain a six foot gap. As a result, one-way traffic patterns are gaining acceptance. Walmart said recently it began instituting one-way movement through aisles in an unspecified number of stores, using floor markers and direction from associates. Kroger is also reportedly testing a one way traffic flow in select stores.

“We expect this to help more customers avoid coming into close contact with others as they shop,” said Dacona Smith, EVP and COO for Walmart U.S. “Starting Saturday, we will limit the number of customers who can be in a store at once. Stores will now allow no more than five customers for each 1,000 square feet at a given time, roughly 20% of a store’s capacity.”

For many retailers, efforts focus largely on social distancing awareness through signing and strips of tape or signs on the floor directing shoppers where to stand, which may or may not be heeded by shoppers. To get a sense of how these efforts are being executed and how shoppers are reacting, Retail Leader set out with an N-95 mask firmly in place and wearing latex gloves to observe the following in the greater Tampa Bay area: