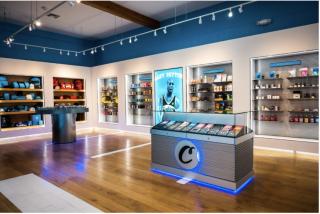 The cannabis holding and operating company TRP this week opened a new Cookies cannabis dispensary location in the Brentwood neighborhood of Los Angeles.

TRP, which was founded in 2019 and describes itself as a vertically integrated retail, cultivation and distribution platform, operates Cookies dispensaries in eight states in the U.S. with locations in California, Colorado, Florida, Massachusetts, Nevada, Oregon, Oklahoma and Washington.

Cookies, a popular marijuana brand in the U.S., was founded by the rapper Berner, who toldInsider in an interview earlier this year that the company is worth at least $1 billion, (which would mean it’s the first legal cannabis company to have such a value). Cookies opened the first 49 of its retail dispensaries between 2018 and this year, according to the report, with flagship stores in San Francisco and LA. There are also Cookies locations in Canada and in Israel.

TRP will operate the Brentwood location, which is located next to the Brentwood Country Mart. The new location is expected to serve customers in L.A.’s Westside neighborhood, which includes Santa Monica and the Palisades, TRP said in a release. The new location is Cookie’s 53rd dispensary to open globally. The last location that opened was a medical marijuana dispensary in Miami, which debuted in August.

"Anyone familiar with Los Angeles knows traveling even 2 miles can take up to 30 minutes in peak traffic," said Daniel Firtel, the president and co-founder of TRP. "Bringing a dispensary to Brentwood in the middle of what is considered by L.A. consumers as the largest cannabis desert in the city means easier access for cannabis consumers who live in between Malibu, Santa Monica and the 405 freeway. They will now have a local shop where they can purchase their favorite brands without having it be a mission."

The growth in cannabis sales in the U.S. comes even though the sale of products that contain marijuana is still illegal at the federal level in the country, although numerous states have legalized cannabis over the last decade. Recreational marijuana is currently legal in 19 states and Washington, D.C., while medical marijuana is legal in 38 states and D.C., according to a CNET report.