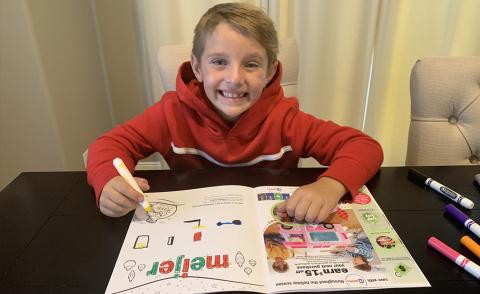 The Meijer Toy Book offers an opportunity for kids to fill out and color their wish list on the interactive catalog's Color-A-Wish page.

Midwestern retailer Meijer is getting a head start on holiday promotions this year by launching an interactive catalog with its top toy picks.

The Meijer Toy Book is designed to offer the classic hands-on catalog approach, so that kids can circle their choices and share them with parents and other relatives, according to the Grand Rapids, Mich.-based retailer. It's being mailed to more than 1.2 million households across the Midwest. Last year, Meijer released its toy book a little later, on Nov. 5.

In a nod to shopper safety, Meijer also noted that items from the book will be available for free Meijer Pickup throughout the holiday season.

"Now more than ever, shoppers are looking for multiple ways to shop and have the toys in their hands as soon as they can, so we are focused on doing our part to help them check them off their list," said May Graceffa, divisional merchandise manager for toys at Meijer.

She also noted that Meijer has "increased inventory" for the upcoming holiday season.

According to Graceffa, the Meijer Toy Book was designed to encourage engagement and recall the days when families would huddle over holiday catalogs, so the book offers an opportunity for kids to fill out and color their wish list right in the book itself on the catalog's Color-A-Wish page. Now until Dec. 20, families can share their child’s Color-A-Wish page using the hashtag #colorawishsweepstakes on Twitter and Instagram to enter for a chance to win a $100 Meijer Gift Card.

Some top toys featured in the Meijer Toy Book include:

In addition to the toys, Meijer added more active gifts, including a trampoline and pop-a-shot.

Beginning Nov. 1, Meijer stores are offering $15 off when shoppers spend $100 on items from toys and sporting goods, excluding electronics and video games, for the holiday season. The promotions are good from Nov. 1 through Dec. 26.