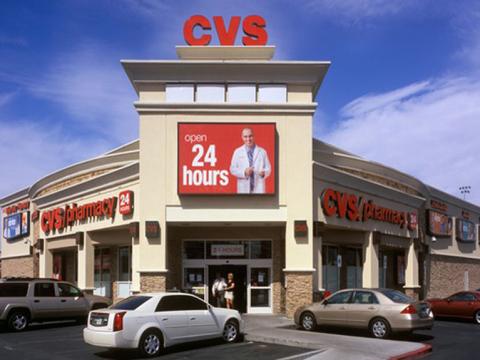 Its pending acquisition of Aetna, which was announced in December and is expected to close in the second half of 2018, is the latest chapter in a decades-long saga of transformation.

With nearly 10,000 stores nationwide, it is easy to view CVS Health as simply a chain drug store operator. It is certainly that, but assuming its $69 billion acquisition of Aetna closes later this year, the combined company will represent a new breed of health care provider that President and CEO Larry Merlo contends will remake the consumer experience.

Benefits of the deal put forth by the companies center on leveraging data to offer a more personalized health care experience by connecting to Aetna’s network of providers, integrating data and analytics to improve patient health at reduced costs by avoiding unnecessary hospital readmissions. Other benefits include the opportunity to better fight chronic diseases while addressing the escalating cost of treatment through a growing roster of services available at stores and an expanding network of Minute Clinics.

Exact details of how the companies plan to leverage their scale will come into sharper focus after the close, but if history is any indication, whatever initiatives are put forth will be innovative. Throughout its history, which boasts an impressive list of acquisitions and state-of-the-art initiatives, CVS Health has nurtured a reputation for innovation and thinking outside the box. Whether it was its aggressive efforts to improve store merchandising, the development of private brands, the launch of the ExtraCare loyalty card, the elimination of tobacco products or the expansion of its health clinics, CVS Health has always been committed to championing innovative platforms to drive growth. The approach has helped differentiate its brand from other drug chains and health providers while preparing the company to win in a dynamic health care industry often viewed as overdue for the type of consumer-friendly disruption that has reshaped other industries.

CVS knows a thing or two about reshaping itself. Its pending acquisition of Aetna, which was announced in December and is expected to close in the second half of 2018, is the latest chapter in a decades-long saga of transformation. The company’s remarkable journey has seen it go from being a division of a retail conglomerate to one of the chain drug industry’s dominant players that is now on the cusp of becoming a uniquely positioned provider of health care. Up until the mid-90’s, CVS was a division of Melville Corp., a retail conglomerate that owned diverse collection of brands including Marshalls, Wilson’s Suede & Leather, Thom McAn Shoes and Kay-Bee Toy Stores. In 1995, Melville spun off other pieces of its retail operation and rebranded itself as CVS. The company proceeded to roll up the chain drug landscape by acquiring Revco, Arbor, Eckerd, Sav-On, Osco, Long’s, Navarro and Target Pharmacies.

Despite all the deals and CVS’s growing physical presence, along the way its non-retail growth led to big changes in the composition of its sales mix. The acquisition of pharmacy benefit manager Caremark over a decade ago meant CVS was less and less dependent on sales from non-pharmacy categories, or what drug store operators refer to as the front-end. For example, in the mid-90’s, CVS sales were nearly evenly split between pharmacy and front-end sales. However, as pharmacy sales grew more rapidly and with Caremark revenues in the mix, front-end sales as a percentage of the total company became ever smaller. Amplifying the situation further was the fact that front-end same store sales have declined each of the past five years, due in large part to the decision to discontinue to the sale of tobacco products in 2014.

The shift is evident in the company’s results for the most recent fiscal year. With total revenues of $185 billion during its 2017 fiscal year, sales from its Retail/LTC (Long-Term Care) segment accounted for $79.4 billion. Within the segment, front end sales accounted for about 25%, or $19.8 billion. That is substantial figure, but it represents a little less than 11% of total company revenues of $185 billion.

The declining contribution of front-end sales to CVS Health’s overall results promises to become even more pronounced in the year ahead. For example, during the current fiscal year, pro forma revenues for the CVS Health and Aetna combination are pegged at $221.4 billion. That means the slow growing front end business could sink to 9.1% of pro forma revenues, according to Retail Leader estimates. 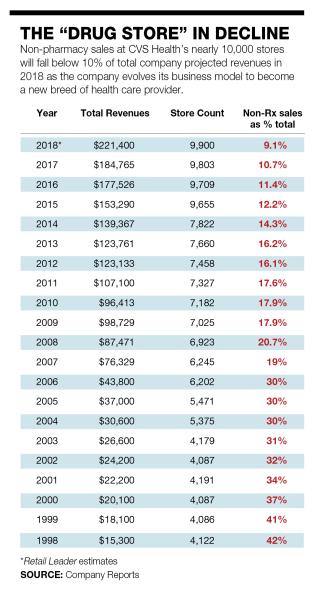 Furthermore, the potential exists for the front end business to sink to 5% or less over time as sales of commodity products industry-wide are projected to migrate to online replenishment while demographically advantaged businesses such as pharmacy and health care related services grow more quickly. Meanwhile, from a branded manufacturers’ perspective, CVS Health has placed an emphasis on its own brands. Its stores now stock 7,000 items that account for nearly 24% of front-end sales.

“There are significant opportunities to expand our share of store brands by launching new products that build upon our core equities in health and beauty, while seeking opportunistic growth in other areas, where we can provide customers a good value. And as a result of our strength in store brands, along with the success of our promotional strategies, front store gross margin, once again, improved in the quarter versus a year ago,” said CEO Merlo after the company reported fourth quarter results.

Clearly there are opportunities for CVS Health to increase the productivity of its front-end selling space, a business challenge for all chain drug operators. CVS Health’s stores and other physical locations remain an incredibly valuable component of the company’s CVS Health delivery ecosystem, especially in post Aetna acquisition world. For example, CVS Health today consists of numerous businesses beyond or integrated into retail stores.

The most obvious of these are the Minute Clinics. There are currently 1,100 locations, but the company has alluded to continued future growth and the potential exists to incent those covered by Aetna plans to seek treatment at clinics.

Other less visible but hugely important health care services include the Coram Specialty pharmacy business that provides infusion services to roughly 140,000 patients and the Ominicare pharmacy that provides services to long term care facilities. Then there are administrative services such as medical claims editing provided by the Novologix platform.

In almost every respect, the combination of CVS Health and Aetna is seen enabling it to further enhance and improve its health care programs. The other benefit of executing the largest health insurance deal on record is that it enables the company to better compete with United Healthcare and pharmacy benefits manager Optum as well as offset any potential threat of Amazon entering the pharmacy business.

“This is the next step in our journey, positioning the combined company to dramatically further empower consumers. Together with CVS Health, we will better understand our members’ health goals, guide them through the health care system and help them achieve their best health,” said Mark Bertolini, Aetna chairman and CEO.

While the pendulum has shifted from what once was a major dependence on retail front-end sales to a diverse portfolio of health care products, innovation has been the cornerstone that is transforming the company, creating a new health care entity, and preparing CVS Health for the decade of the 2020s and beyond.