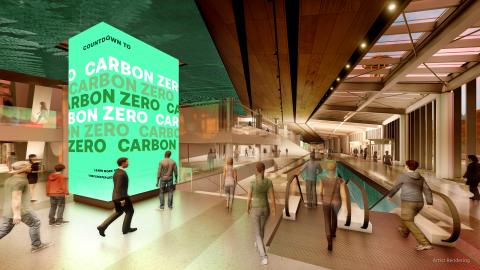 Here’s something that rarely happens, courtesy of Amazon: The online retailer has bought the naming rights to a Seattle sports stadium, but will refrain from putting its name on the structure.

Instead, the facility will be named the Climate Pledge Arena. Its previous name was KeyArena.

Seattle’s new — and still unnamed — NHL team will call the arena home, as will the city’s WBNA team, called the Seattle Squad.

“We’ve secured naming rights to the historic arena previously known as KeyArena. Instead of naming it after Amazon, we’re calling it Climate Pledge Arena as a regular reminder of the importance of fighting climate change,” said Jeff Bezos, Amazon founder and CEO. “We look forward to working together with Oak View Group, a new Climate Pledge signatory, and NHL Seattle to inspire global climate action.”

Amazon, of course, has its headquarters in Seattle. The news about the renamed stadium comes amid ongoing pushes toward “sustainability” among retailers of all types.

The online retailer made waves last year when it released its “climate pledge,” a plan to end its net carbon emissions by 2040. “With significant investment from Amazon and Oak View Group, the [stadium] is expected to be the first net-zero carbon-certified arena in the world and set a new sustainability bar for the sports and events industry,” Amazon said. Oak View Group, a global sports and entertainment company founded by Tim Leiweke and Irving Azoff in 2015, will redevelop and operate the renamed stadium.

It’s not hard to think of stadiums named after retailers — think of Target Field in Minneapolis, or Camping World Stadium in Orlando, Florida, or Kroger Field in Lexington, Kentucky, among many others.

The Climate Pledge Arena will not only go against that trend but will, according to Amazon, “have all-electric operations and be powered with 100% renewable electricity, both from on-site solar panels and off-site renewable energy." Other features include:

“There is no question that the state of our planet is a critical issue for all of us,” said Tim Leiweke, CEO, Oak View Group. “We have a responsibility to future generations to try to leave them with a better world. We love that Amazon is using its naming rights for a cause we care deeply about—this partnership is a visionary step for the facilities business and sport and music industries. Our goal is to be the most progressive, responsible, and sustainable venue in the world. It is not just about one arena—it’s a platform for us to step up and heal our planet.”