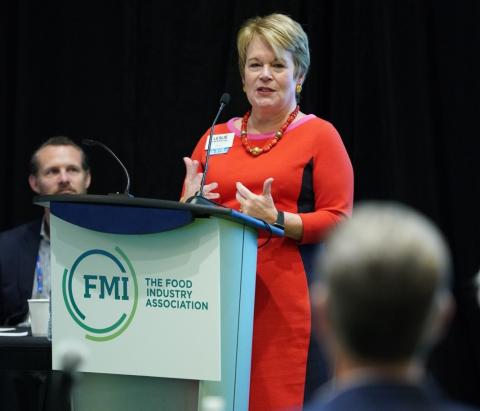 The organization formerly known as the Food Marketing Institute begins 2020 with an inclusive new identity more reflective of the market it aspires to serve. Just as the requirements of remaining relevant in retail involve constant readjustment to satisfy shoppers' expectations, the same principle applies to trade associations who serve members operating in a tumultuous and unforgiving marketplace.

The most recent example of this reality involves an organization those in the world of food retailing know well and refer to simply as FMI, an acronym for the Food Marketing Institute. The trade group recently rebranded to give new meaning to the FMI acronym – it now stands for Food Marketplace, Inc. – and adopted the tagline, “the food industry association.”

As rebrands go, it is not as dramatic as when the organization formerly known as the Grocery Manufacturers Association (GMA) changed its name recently to the Consumer Brands Association (CBA) or when nearly two decades ago the organization formerly known as the International Mass Retail Association (IMRA) changed its name to the Retail Industry Leaders Association (RILA). Those changes involved entirely new names, whereas with FMI the acronym remains, but the phrase, “food industry association,” reveals a philosophical shift to be more inclusive of all types of food retailers.

“The journey of our newly announced rebrand took us into some new learnings about the services we offer that you find most valuable and helpful,” FMI president and CEO Leslie Sarasin told attendees Sunday morning at the organization’s annual Midwinter executive conference in Phoenix. “Our path of self-discovery and adventure to redefine ourselves has revealed our need to unlearn some things, question everything, and stop doing things the same ways simply because that’s the way we’ve always done them.”

Sarasin said FMI scrutinized most everything it does to assess whether it was adding value, and if it wasn’t then those activities were placed on the “unlearn” pile.

“And like the industry we serve, we’ve had to relearn the value of solid customer service, listening to you more closely so we might prove to be the valued partner you seek in your trade association,” Sarasin said.

Delivering value is an often discussed concept, but in FMI’s case the shift to become “the food industry association,” means the organization is effectively pitching a bigger tent and creating a food flywheel of sorts. To the extent FMI is successful recruiting new and non-traditional food retailers as members, it will speak with an even more powerful voice on regulatory issues. Meanwhile, an expanded retailer base increases the value of the organization’s events to CPG suppliers and solution providers who play an increasingly important role in the Midwinter conference.

And like all good branding statements, the “food industry association,” has an aspirational element to it. For if FMI wants to be reflective of the larger food retailing universe it has work to do to diversify its membership base. This much is evident at the Midwinter conference which, to be fair, is a fantastic event in terms of the senior level executives it draws from some of the largest and most progressive food retailers and CPG companies. However, it is also noteworthy because of those companies who are absent. For example, the names of retailers who sell large amounts of food and consumables, such as Walmart, Target, Dollar General, Aldi, Walgreens and CVS, don’t appear on the attendee list. That situation is poised to change in coming years.

“Driven by consumer relevance, we are in the business of food, wherever it is bought, sold or produced, and we are well-positioned to represent everything in the shopping basket – and work closely with every participant in the marketplace,” Sarasin said when the rebrand was first announced.

With a familiar acronym but a more comprehensive, consumer-centric view of the marketplace, FMI: the food industry association has established a much needed vision to ensure its relevance for generations to come.