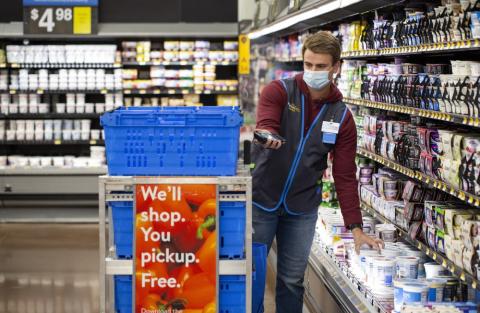 A stunning 74% increase in e-commerce sales and a 10% same store sales increase at Walmart U.S. pushed sales to a record level and tested the retailer's supply chain.

Pantry loading behaviors were clearly evident in the results Walmart reported for the quarterly period ended April 30. Total sales for Walmart’s 4,753 store U.S. division increased by $8.4 billion, or 10.5%, to $88.7 billion. Operating profits for the division increased 3.9% to $4.3 billion.

The volume of the sales increase is stunning and can be put in perspective by comparing it to the the 2020 edition of the Fortune 500 list. If the the $8.4 billion in sales Walmart added in one quarter, from one division, were a stand alone company it would rank 377th on the Fortune 500 list. Viewed another way, that same $8.4 billion is enough to rank 44th on Progressive Grocer'sPG 100 list.

Same store sales at Walmart’s U.S. stores surged 10% but a major change in shopper behavior was evident in the composition of the increase. Walmart said transaction volume declined 5.6%, but average transaction volume increased 16.5%. Those figures are consistent with behaviors observed by other retailers who have noted shoppers consolidated trips during March and April but bought substantially more per trip.

As expected, Walmart’s said its food and consumable sales were strong and grocery pickup and delivery reached all-time high sales volumes. The combination of those factors drove the 74% increase in e-commerce sales as online orders fulfilled by stores are reflected in e-commerce results.

The company said its strength in food was broad-based across categories while consumables' sales were led by paper goods and household chemicals. Pharmacy comp sales also increased by a high single-digit percentage due to branded drug inflation and strong 90-day prescription growth. Walmart did lose sales from the temporary closures of vision centers in mid-March.

In terms of general merchandise, Walmart said sales were volatile across categories as stay-at-home mandates and government stimulus money affected results. Strength was reported in categories such as electronics, media and gaming, toys, sporting goods and home. Crafts and fabric sales were particularly strong. This was partially offset by softness in apparel as well as lost sales from the temporary closures of automotive service centers in mid-March.

Despite a record start to its new fiscal year, Walmart followed suit with many other company’s and suspended financial guidance for the remainder of the year. The decision reflects significant uncertainty around factors such as the duration and intensity of the COVID-19 health crisis globally, the length and impact of stay-at-home orders, the scale and duration of economic stimulus, employment trends and consumer confidence, according to Walmart CFO Brett Biggs.

“Our business fundamentals are strong, and our financial position is excellent. Customers trust us to deliver on our brand promise, and I’m confident in our ability to perform well in most any environment,” Bigg said. “While the short-term environment will be challenging, we’re positioned well for long-term success in an increasingly omni world.”