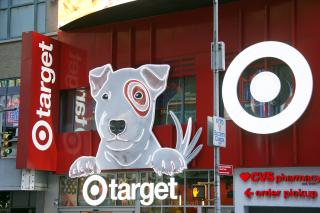 Target is launching a new store format that will be significantly larger than its average stores, placing a focus on the new format in the coming years.

In a Nov. 10 release, the retailer said the new stores would be nearly 150,000 square feet — about 20,000 square feet larger than a typical Target store. The large-format stores will offer the retailer’s range of merchandise, including its owned brands, expanded food and beverage options, and more brand partnerships, according to the release.

One of the most significant changes coming to large-format Target stores is a backroom fulfillment space five times larger than at stores of a similar size. The retailer said increased fulfillment space will allow it to more easily fulfill digital orders and same-day services, which account for 10% of its overall sales.

Target is also rolling out a new store design, which will be found at the large-format stores and eventually at some of the retailer's existing stores. The new layout is more open and will include more localized elements.

“Target’s stores are at the heart of how we deliver for our guests, whether they browse the aisles, shop online or stop by for same-day services like order pickup and drive up,” said John Mulligan, executive vice president and COO at Target, in the release. “With our reimagined store design and larger store footprint that better supports our same-day services, we can give guests more of what they love while incorporating features that build on our commitment to sustainability, community and helping all families discover the joy of everyday life.”

Existing Target stores that adopt the redesign will include larger windows and an open layout to increase natural light. The stores will have design elements that include regionally sourced reclaimed wood and other localized design features, including native plants and regional product offerings, Target said.

The retailer in the release said the new design would also help it reach its sustainability goals. The redesigned stores will include natural refrigerants to reduce emissions, solar panels at “many” locations and EV charging stations for customers.

The first store to receive the updated layout is a Target store outside Houston, the retailer said in the release. Over half of the nearly 200 store remodels happening next year will get the new design, and the majority of the 30 new stores Target is opening will also recieve it. By 2024, the retailer said all of the remodels and new Target stores would feature the new design.

While it said it would focus on the larger stores, Target added it would still open stores of all sizes in the coming years. Target is one of many retailers that has opened small-format locations in city centers, college campuses and other areas where larger stores are impractical. Target operates more than 100 small-format stores, opening 28 stores with the format last year alone, Retail Leader reported.