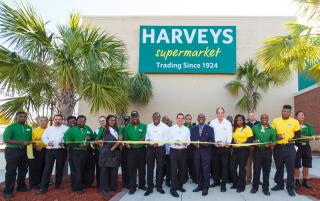 Conventional grocers are in the fight of their lives with all manner of competitors vying for share in the huge but low margin world of food retailing. Between Aldi and Lidl, Walmart and Kroger, expanding e-commerce options and non-traditional food retailers such as dollar and drug stores, competition has never been more abundant. Then there is the unsettling thought of how the market will be impacted by the combination of Amazon’s supply chain prowess and Whole Foods’ physical footprint.

What’s a conventional grocer to do? If you are Southeastern Grocers the answer is to breathe new life into aging Winn-Dixie stores by converting them to the company’s Harveys Supermarket banner. That’s what the company did over the summer when it expanded the Harveys banner in Florida by converting seven former Winn-Dixie locations. The change gave Harveys a total of 18 locations in Florida and boosted the banner’s total to 77 locations in a four state trading area that also includes Georgia, North Carolina and South Carolina.

The latest incarnation of Harveys is based on a value oriented prototype introduced in Jacksonville, Fla., on May 2016 that was followed by a revised prototype that opened in Charlotte, N.C., in July 2016. Last November, the new pricing scheme and design elements featured in the prototype were extended to all Harveys locations.

The newest round of store conversions show how a company that is at a competitive disadvantage to larger rivals in many respects ranging from store locations and financial resources can transform tired real estate with simple design features, signing and a new pricing strategy to appeal to price sensitive shoppers.

The combination makes Harveys an unusual store in many respects. For example, an understated exterior façade is painted hunter green, but inside shoppers are met by a blast of yellow and red and bright lights. The outer walls are painted yellow, which makes perimeter departments identified by black letters really stand out. Retailers frequently use yellow and red to convey promotional intensity and Harveys has really outdone itself on that front. One of the store’s signature merchandising elements is the “$1 Zone.” Harveys created a large valley through the center of the store where low tables are flanked by gondolas to create a sort of dollar store within the store. The $1 Zone with its 1,200 items across all types of categories is clearly identified by large red and yellow signs and items within the department are further promoted with hundreds of oversize shelf edge signs.

The promotional intensity of the $1 Zone is offset by other areas of the store where Harveys attempts to convey a mix of pricing messages. For example, extensive signing touts prices on 725 products that are “low and staying low,” along with Harveys’ slogan of, “that’s a promise.” Another 1,800 items are promoted as “great low price” items. The retailer also offers a basket building promotion featuring 75 products called “Pick 5,” which allows shoppers to buy five items for $19.95.

“Due to the overwhelming positive customer response of recent Harveys Supermarket openings and extensive customer listening sessions we have identified that our Harveys Supermarket banner is best tailored to provide the service, products and prices our customers in the area desire,” Anthony Hucker, Southeastern Grocers President and CEO, said when the recent round of stores debuted.

Overall, Harveys offers a merchandising presentation that is functional and highly promotional and most important, different from Winn-Dixie, a banner that has been on a long-term downward trend. In the mid-1990s, Winn-Dixie was one of the nation’s leading food retailers, operating more than 1,200 stores through the South and southeastern states with annual sales of around $14 billion. But then it ran into the combination of Publix, Walmart and increased availability of food at all types of retailers, which had the cumulative effect of eroding customer traffic. Walmart and Publix both grew rapidly and gained market share in core Winn-Dixie markets. The company would close more stores and by early 2005 had filed for bankruptcy. It emerged from bankruptcy in 2006 with 522 stores in five southeastern states.

By early 2012, Winn-Dixie had shrunk to 482 locations and it was acquired by Bi-Lo for $559 million to create Bi-Lo Holdings. The following year the combined company acquired 155 stores from Delhaize Group, including 72 Sweetbay, 72 Harveys and 11 Reid’s locations. The Sweetbay locations, which had once operated under the Kash ‘n Karry banner, were converted to Winn-Dixie stores and the Reid’s locations were converted to Bi-Lo stores. The Harveys stores, which Delhaize had acquired in 2003, remained Harveys. In late 2013 Bi-Lo Holdings also acquired 21 Piggly Wiggly stores.

In 2015, Bi-Lo Holdings was renamed Southeastern Grocers and then last year it began experimenting with repurposing Winn-Dixie locations for other banners. The Hispanic concept Fresco y Mas debuted in Florida and now numbers 11 locations and the recent Harveys conversion has further eroded the Winn-Dixie store count.

Whether the trend continues now rests with Southeastern Grocers’ new CEO, Anthony Hucker. He joined the company in March 2016 as COO and was elevated to the CEO role in July to replace Ian McLeod who resigned after two years. Prior to McLeod, the top job had been held by Randall Onstead since 2012.

Hucker, like McLeod and Onstead before him, brings a wealth of grocery experience to Southeastern Grocers. He previously spent two years as President and COO of Schnucks Markets, two years as President of Ahold USA’s Giant Food division, and prior to that seven years with Walmart in a variety of roles, including vice president of strategy and business development at the time of his departure in 2011. He also spent nearly a decade with Aldi in the United Kingdom.

Hucker will need all the merchandising, marketing and operational skills acquired throughout his career to ensure Southeastern Grocers remains relevant to shoppers in the face of intensifying competition. Conversion of additional Winn-Dixie locations to the Harveys banners represents a relatively low cost way, judging from the limited improvements at recently converted stores, to bring renew shopper interest. At last count, Winn-Dixie operated 495 stores, of which 358 are located in Florida, where the brand is even further behind the likes of Walmart and Publix than it was a decade ago, not to mention newer market entrants. RL