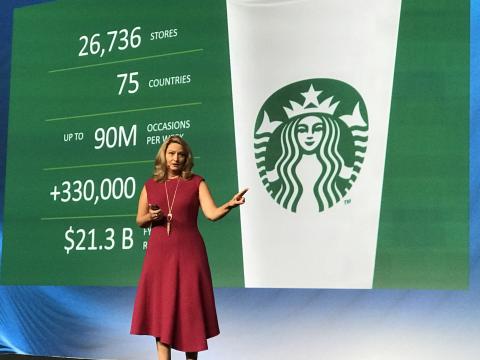 More than 80% of Starbucks store managers use Workplace on a weekly basis, according to CTO Gerri Martin-Flickinger, which gives the company a way to communicate instantly.

Target refers to its employees as team members, Walmart calls them associates and at the nation’s top automotive retailer they are simply AutoZoners. At Starbucks, employees are partners and those in stores directly serving customers are baristas, the Italian word for a preparer of various coffee drinks.

Whatever a retailer chooses to call its employees, one thing all have in common is that hourly employees who directly serve customers have a feel for the pulse of the business that can’t be sensed from a corporate office even when financials are available in near real time. Frequent store visits help and social listening capabilities allow for the early identification of potential problems. However, nothing beats listening to one’s own employees about what’s working and isn’t working. Listening gets a lot harder though as companies get bigger. The standard layered operational structure required to manage the business creates a wider gap between senior executives and front line employees at a time when their input has never been more important.

This challenge is magnified for retailers with a national footprint and more difficult still for international operators. Consider the situation with Starbucks. The company is on track to operate more than 28,000 stores in 2018 with locations in 75 countries. Longer term, it has announced plans to add 12,000 new stores globally, including 3,400 stores in the U.S. by its 2021 fiscal year, a level of growth that requires the addition of 240,000 partners.

Staying engaged with such a large workforce in far flung locations has been simplified somewhat by the advent of social media and Starbucks is exploiting social technology with a few wrinkles. The company created what amounts to an internal social network called Workplace that functions as a platform for dialogue and the exchange of ideas, horizontally and vertically within the organization.

“Last year, we decided we really wanted to take the power of social collaboration and bring it into Starbucks, as a way to connect stores spread all over with those of us who sit in Seattle, and have a hard time finding a way to be intimate with all of the store teams,” said Gerri Martin-Flickinger, Starbucks Chief Technology Officer. “(Workplace has been so successful that even our CEO Kevin Johnson uses it every week for a chat and a video conversation with our partners. And every one of us on the executive team have very, very active groups, and we are engaged consistently and constantly in this format.”

More than 80% of Starbucks store managers use Workplace on a weekly basis, according to Martin-Flickinger, which gives the company a way to communicate instantly. That sort of real-time feed back from front line employees is hugely important for agile companies who employ the test, learn, iterate approach to their overall operations, not just technology developments.

“One of the things that’s very exciting is (Workplace) has given us the opportunity to have the people who use our technical solutions give us feedback in a more direct way. Almost immediately when we opened up Workplace, we had store managers and partners telling us about the technology in their stores and ideas they had about how we could make it better, or what we could do differently,” Martin-Flickinger said during a keynote presentation at Gartner’s recent Symposium/ITxpo. “Our technologists have the opportunity to engage in that conversation directly. They can chat back and forth, and the next thing you know, we can add a new feature to the POS to make their life easier. In the past, having that kind of collaboration would be really difficult.”

Such feedback is essential given that Starbucks is one of the more active retailers when it comes to layering on new capabilities to its mobile app which then impact usage and workflows. Martin-Flickinger joined Starbucks in November 2015 after previously holding CIO roles at Adobe, VeriSign, Network Associates and McAfee. That was about two months after the company had completed the U.S. rollout of Mobile Order & Pay, functionally integrated into the Starbucks app that lets customers order ahead of visiting a store and integrated with the loyalty program. Mobile Order & Pay was piloted in the Northwest in December 2014 and the popularity led to a quick rollout and subsequent challenges related to making sure customers drink orders were ready when they arrived. Those kinks have been largely addressed and more recently Starbucks added voice ordering capabilities to the app as an extension of Mobile Order & Pay.

Another key way Starbucks is able to leverage the Workplace social platform is by integrating front line workers’ feedback into new store designs. Many Starbucks stores are not very large and workflow considerations can have a huge impact on productivity, especially in high volume locations. Starbucks is now using virtual reality systems in partnership with Autodesk, a provider of 3D architectural software, to imagine store spaces in a totally different way. The system gives designers the ability to observe a store at different times of day, envision customer traffic and even the effect of sunlight.

“We can have people move through the space and do various activities, like make a beverage or move furniture and this has now become common practice,” Martin-Flickinger said. “It’s kind of funny because you’ll come into the executive boardroom and people will have virtual reality headgear on and they are walking around and touching. We do this now as we're getting ready to finalize the build-out of our stores worldwide.”

The technology is supposed to improve the store design process and the environment in which partners work. If that proves not to be the case, Starbucks partners are able to use the Workplace platform to share their concerns.