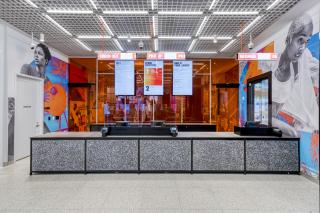 Nike in November opened a new store location in Miami, the first of its digitally focused Nike Rise concept in the U.S.

The store opened last week in Miami’s Aventura Mall. The retailer previously opened Rise locations in Seoul, South Korea, and London. It first tested the concept in Guangzhou, China, in 2020.

According to Nike, the Rise concept store is meant to support the retailer’s physical and digital shoppers of all ages and genders. The concept is the latest indication the retailer is doubling down on integrating elements of its omnichannel experience, including its stores, website, various mobile apps and recent efforts in the metaverse. The retailer also this month announced Swoosh, a soon-to-launch virtual platform where members can collect, trade and design virtual items.

The Rise store will also be the first to introduce U.S. customers to Sport Pulse, which the retailer describes as its “new digital storytelling platform that visualizes local sport, city and athlete data to create one-of-a-kind content within the store.” Sport Pulse will be featured prominently at the new Miami store in an area the retailer has dubbed the City Core Atrium. It’s a two-story LED display that will show off Nike brand campaigns, “real-time sports moments,” and member data from Nike’s training club and run club apps, the retailer said.

“We are scaling our investment in every facet of our retail business to increase access to sport and inspire, connect and serve athletes through curated digital and physical experiences,” said David Kelsay, vice president of Nike’s North America stores, according to SGB Online. “Digital drives everything from consumer insights, store design, online-to-offline services, in-store fitness experiences and workouts via our digital app ecosystem. We aim to create digitally enabled and differentiated retail experiences to create seamless shopping and fitness journeys for our consumers across our marketplace.”

Central to the store is what Nike calls The Sport Hub, where its digital and physical efforts are married. Shoppers can use this outpost to return items they’ve purchased online or pick up online orders, according to the retailer. They can also access benefits associated with Nike’s Snkrs Pass, a member rewards program that enables customers to reserve “coveted sneakers” for in-store pickup.

The Nike Rise store will be the second U.S. Nike location to feature dedicated space for the retailer’s Nike By You experience, which enables shoppers to work with an “expert” to customize apparel and shoes with iron-on decals, patches and shoe jewelry, the retailer said.