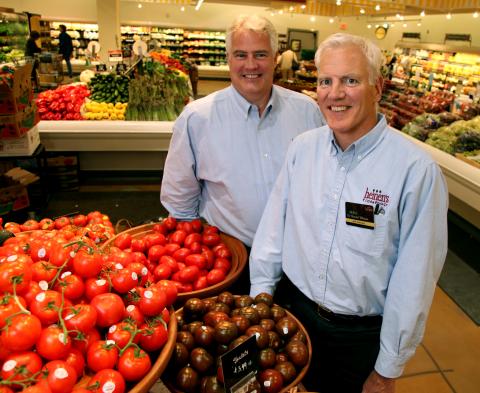 Brothers Tom and Jeff Heinen are third-generation owners and co-presidents of the food retailer.

Cleveland-based Heinen’s Fine Foods’ decision to open a store in an old bank building three years ago was not the type of move a larger company would have made. The financials didn’t add up and the space presented all sorts of operational challenges. However, the 23-store Heinen’s chain is a family owned company with deep roots in Cleveland and a vested interest in the viability of Cleveland’s urban core. Those factors allowed the company to move fast and push aside bottom line concerns to open a store best described as stunning, impractical and essential.

Brothers Tom and Jeff Heinen, third-generation owners and co-presidents of the food retailer, gave new meaning to the phrase “giving back to the community,” in 2015 when they decided to open a supermarket in an old bank building. The space was poorly configured for food retailing, had bad ingress and egress for deliveries and it had sat empty for nearly 25 years. The Heinen brothers also knew going in that a supermarket in downtown Cleveland would take years – if ever – to turn a profit due to downtown Cleveland’s limited population density.

Despite all of the negatives, the Heinens went for it in a total, from-the-gut move, inspired by their family’s near century long connection to the community. The thinking was a supermarket could serve as a catalyst for continued residential growth of Cleveland’s urban core and converting the bank to the supermarket would salvage a magnificent piece of architecture.

“There were many, many people who believed downtown Cleveland could not continue the growth pattern of increased residential living without a food store option,” said Jeff Heinen.

Downtown Cleveland was enjoying some renewal momentum before the opening of Heinen’s showpiece. There were about 12,000 people living in downtown when the Heinens made the decision to open the store, well below the 20,000 residents Jeff and Tom said is typically need to support a profitable grocery operation. By the time the store opened the downtown population had grown to 13,500 and today there are about 16,000 residents with further growth expected.

“As lifelong Clevelanders, we understood (a grocery store) was important to continue the momentum of people living downtown. It was our give back to the city of Cleveland because Cleveland has been good to Heinen’s,” Jeff Heinen said. “As a small, family run business we can make decisions like that. This wasn’t a great business decision. This was a great decision for the city of Cleveland.”

The store could prove to be a wiser decision than the brothers first thought. That’s because operating a store in downtown Cleveland in an unconventional piece of real estate is causing the Heinens to develop some new operational and analytics muscles that will be useful as the company contemplates openings in other urban areas. As Tom Heinen pointed out, the retailer now operates four of its 23 stores in Chicago, a market where a small format could create new growth opportunities in more densely populated areas. Currently, Heinen’s Chicagoland stores are located in the suburban communities of Glenview, Bannockburn, Barrington, and Lake Bluff. However, those areas are pretty similar to Cleveland area stores in that they are well north and northwest of downtown Chicago and in the case of Lake Bluff only 10 miles from the Wisconsin border. According to Tom Heinen, the company’s store in downtown Cleveland gives the company, “a way to experience urban markets so if and when we decide to go into downtown Chicago we have a lot better idea about designing and operating stores there based on our learnings in Cleveland.”

The company has no imminent plans to make such a move, but were it to do so, it is hard to imagine the company could find a more challenging real estate project than what it dealt with in downtown Cleveland. For example, to deliver goods to the store trucks navigate a narrow alley that has one way in and one way out. Merchandise is dropped on one of two loading docks shared with tenants in adjacent buildings. From there, a freight elevator is only able to move two pallets at a time to a basement stockroom that doubles as a food preparation area. Products then have to be brought back upstairs to either the first or second level via elevator or stairs. The entire process is much more labor intensive than in a typical suburban location configured with operational efficiencies in mind.

While the Heinens have found ways to cope with the operational challenges of the unique location, the retailer has also become a more aggressive user of data to manage assortments geared to new consumption patterns, pack sizes and shopper frequency. Heinen’s has long used data to inform assortment decision-making but now the company is entering a new era of leveraging data through a partnership with dunnhumby to drive personalization and pricing decisions. Heinen’s, like many smaller retailers, is part of the “democratization of data,” movement that gives the company the type of data collection and analytical abilities once reserved for larger organizations with big IT budgets. 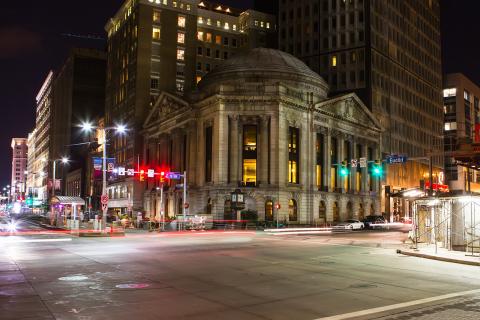 “Being small when you deal with big data is actually an advantage,” explained Tom Heinen. “Big companies are like driving a cruise ship. We are in a speedboat and can change very quickly. What has really leveled the playing field for smaller companies is good data driven decisions.”

Leveraging data is especially important at the Heinen’s downtown Cleveland store because it is such a unique format. The store is small at 27,000-sq.-ft. compared to the typical 42,000-sq.-ft. Heinen’s suburban location and being in an urban area also means serving a higher concentration of Millennials as opposed to suburban families. One of the early insights based on purchase behavior was the need to add a hot bar to accommodate the demand for prepared meals and meal solutions that are much greater in the urban store. The company takes things a step further than the obvious use case to plan meals and incorporate ingredients based on trends and other behaviors revealed by consumption and urban lifestyle patterns.

“We are not really headed to creating Blue Apron style meal kits as much as we are looking to create meal solutions for customers where they have choices of entrees and side dishes to choose from and we are going to pair them more effectively than we do now,” Tom Heinen said.

While Heinen’s faces many of the same competitive challenges as other retailers and some unique one related to their downtown Cleveland store, persuading employees to work at the unconventional location wasn’t one of them. The store is staffed by 90 people and 55 of those positions were filled by employees who volunteered from other stores, according to the brothers.

“As a company we believe we invest way more time, energy and money into developing the knowledge and skills of our people than the average retailer and food retailers for sure,” Jeff Heinen said. “We see people as one of the ways we truly create a differentiated shopping experience so it is very important strategically that our people have the knowledge and skills to do that.”

Tom Heinen added, “We view people as an asset to be leveraged, not a cost to be minimized.” RL

Take a video tour of Heinen’s Cleveland store with Tom and Jeff here. 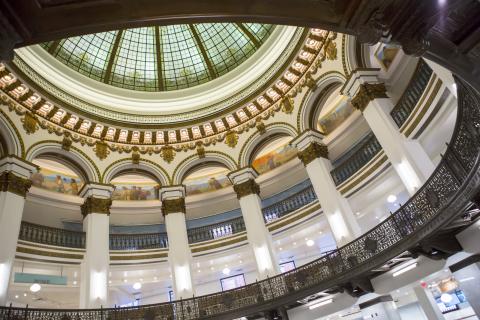