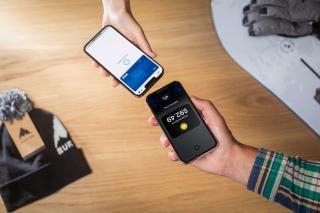 Omnichannel mobile services provider NewStore announced that it has rolled out “Tap To Pay on iPhone” functionality to all of its customers in the U.S., allowing retailers that use the service to accept contactless payments directly on iPhones without the need for external equipment.

In a news release, the company said Burton, GANNI, Outdoor Voices and Vince stores were the first of its retail partners to adopt the new service. NewStore also said that its data showed that half of all credit card transactions through its service now occurred using Tap to Pay on iPhone in store locations where the service was available.

Brian McAllister, the director of global operations at Burton, said payment processing time at its stores had decreased by “as much as 30%” since it adopted the new feature.

“Those seconds add up during peak hours, and the time saved allows our guides to better serve customers and take care of other important tasks,” McAllister said in the release.

“Our vision has always been to allow brands to run their stores solely on iPhone, eliminating the need for traditional POS technology, which can be clunky, expensive and not always user-friendly,” said Stephan Schambach, the founder and CEO of NewStore, in the release.

The use of contactless payments, which allow customers to pay for goods and services by tapping a card or a mobile payment-enabled smart device like a phone or smartwatch, skyrocketed during the COVID-19 pandemic, CNBC reported in 2021.

Nearly half of people polled in a 2020 Visa survey of consumers and small business owners in eight countries said they’d avoid shopping at a store that did not offer contactless payments. Mastercard said its data showed that the use of contactless payments increased by 40% in the first quarter of 2020 compared to 2019.

In February 2022, Apple announced that it would support the tap-to-pay feature, allowing businesses to accept Apple Pay or another contactless payment card or device as payment natively on iPhone. The service requires retailers to use an iPhone XS or above and to be updated to at least its iOS 15.5 software.

“In collaboration with payment platforms, app developers and payment networks, we’re making it easier than ever for businesses of all sizes — from solopreneurs to large retailers — to seamlessly accept contactless payments and continue to grow their business,” Jennifer Bailey, Apple’s vice president of Apple Pay and Apple Wallet, said in a February press release.

Apple says it does not store card numbers on its devices or on its servers.

Other mobile solutions providers, like Square, have also announced plans to integrate the feature into their services. The company began testing the service in June and has said it planned to roll it out more broadly by the end of this year.