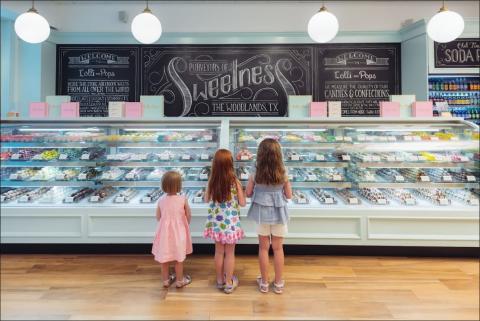 Technology is also helping Lolli & Pops ensure that its sales clerks are engaging with customers regularly.

On a perfect spring day that seemed to be tailor-made for Instagram, dozens of children and adults in Atlanta stood outside, looking at their smartphones, waiting.

The weather had finally turned beautiful after a cold winter, so one might think they were pausing to take turns snapping selfies in the sunshine. But, in fact, they were just biding their time, waiting for the upscale Perimeter Mall to open. When the doors opened, many shoppers headed to Lolli & Pops, a fast-growing candy retailer based in San Francisco that is convinced delighting shoppers and leveraging technology are keys to physical retail’s bright future.

“People walk in and leave the store very happy,” said Sid Gupta, CEO of Lolli & Pops. “Candy elicits a very emotional response. And then when I looked around at how everyone else was selling candy, I asked myself, for such an emotional product, why is everyone selling candy in such an un-emotional way? I thought we could sell candy in a better way.”

At a time when people in the industry talk about right-sizing their brick and mortar operation, Gupta talks about how quickly he can expand his store footprint.

Under his leadership, Lolli & Pops has experienced remarkable growth since its founding in 2012. The company Lolli & Pops Inc. now has 47 stores under its namesake banner, and 12 stores under the Candyopolis banner. It plans to open 30 more Lolli & Pops stores this year, which would make it the leading specialty candy store chain in the United States.

The success of Lolli & Pops would seem to fly in the face of many retail and CPG trends, from healthy snacks overtaking the confectionary category, to candy sales declining or moving online. But plain old-fashioned candy is, in fact, still a strong seller, and much of it is still an impulse purchase transacted in physical stores.

When it comes to food, yes, it’s true, many American consumers are “putting their health first.” As a result, sales of everything from better-for-your snacks to organic eggs to kombucha are on the rise. While food retailers are scrambling to install juice bars and kombucha taps in response, the snack industry is awash in mergers, acquisitions and efforts that aim to turn candy makers into “innovation snacking powerhouses,” as Hershey puts it.

But hard candy, chocolate and other sweet snack categories are still growing. “The candy category is a $30 billion retail category and it’s never been down, since it started being tracked during the Great Depression,” Gupta says. “Candy is not dying. The way we consume candy is very different from other foods. We consume it infrequently. Candy is a treat consumers eat in moderation and it’s very well woven in our traditions.”

It’s clear that Americans still love a good indulgence. But not just any piece of candy. As consumers look to moderation, the perceived quality of the sweet or salty snack is ever more important. It’s something that Gupta says led him to found Lolli & Pops.

Gupta is an accidental retail disruptor, although he did always have an entrepreneurial itch, he says.

After growing up in the San Francisco area and going to college in Chicago, Gupta worked on Wall Street in investment banking and private equity. A few years later he left and started looking for things to do. He discovered a distressed chain of 11 candy stores, called Candyopolis, based in Oklahoma City. At the time, he admittedly knew nothing about running a retail company. But it was a small business, he thought to himself, and he was sure he could make something out of it.

So he brought his electrical engineer father out of retirement and they both moved to Oklahoma City together to learn about running a retail business. During this time Gupta also earned an MBA from Stanford, where he ran the business with his dad (who remained in Oklahoma) from his dorm room.

The time at Stanford allowed Gupta to really think about where retail was going. He took an exploratory trip to Europe and zeroed in on the experiential model of retail there. On that trip he learned the two key insights that would become the core value propositions for Lolli & Pops: delightful service and experiential retail.

One step into a Lolli & Pops store and it’s impossible not to feel that inner delight. The retailer sets a compelling stage with a store design featuring pastels, ornate molding, vintage typography and delicious displays supporting the star of the show: a mouth-watering assortment of specialty chocolates, colorful candies, chilled novelty sodas, and other treats from around the world.

About 80% of the assortment at Lolli & Pops is name brand, while the rest is private label. Gupta says the company has launched about 200 private label products over the past year. And as the company develops even more of its own products, he takes great care to balance being on-trend by offering vegan, gluten-free and other popular candy options.

Complementing the store’s impressive assortment are employees whom Gupta calls “magic makers,” dressed in bow ties, striped aprons and straw boater hats. Staff immediately greet and engage customers as they enter the store, and offer samples. In fact, Lolli & Pops employees have the okay from management to open any product in the store and share it with customers. From the looks on customers’ faces that Saturday in Atlanta, it’s obvious that the generous sampling policy is creating delighted shoppers one taste at a time. The company also conveys delight with its packaging. The company’s products come in packs designed to look like a gift.

Between the vast assortment, the cheery staff and the samples, there is a sense of magic at Lolli & Pops. In a sign of just how important delighting customers is, the company measures success with “happiness counts” or how many people have been delighted on a daily basis. “Last year we had 4 million guests. When we think about that, we get really inspired by the idea of growing that? And one day we could touch 100 million people? So how do we do that?” Gupta said.

One way the company plans to do that is with technology. Lolli & Pops is working to leverage tech to improve and learn about customers’ in-store experience. Not just any technology, but facial recognition.

The retailer has been working with Intel Corp. to develop a customer loyalty program that uses facial recognition to pull a profile on each customer as he or she enters the store. Intel has been installing entrance-facing cameras at Lolli & Pops stores and arming associates with tablets that are synced with a camera so when loyalty members enter the store they can be offered recommendations based on their previous purchases.

Technology is also helping the business ensure that its sales clerks are engaging with customers regularly.

“You can’t have an imbalance of employees to customer. So we have focused on how to use AI and deep learning to predict guest traffic and improve scheduling. We are working with a startup in San Francisco to leverage that,” Gupta said. For its e-commerce operations, Lolli and Pops focuses mainly on gifting. It has a limited assortment of gift-focused products online. But Lolli & Pops leverages its physical assets, the in-store information it collects, to determine what products should be sold as gifts online. It is this kind of retail model that makes the company so successful.

While lots of innovation swirls about the candy industry, from small brand growth to big brands attempting to position themselves as healthy snack purveyors, the rapid growth of Lolli & Pops proves there is still a place for old-fashioned, brick and mortar food retail. As long as the right ingredients are in place.RL