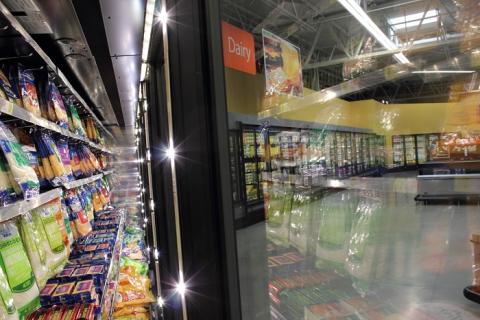 Want to get the CFO’s attention? Trying reducing energy consumption to save millions of dollars that drop straight to the bottom line. Want to really heighten interest? Also show how the measures taken to achieve those savings improved the store experience and contributed to sales growth.

That’s what Walmart has been working on for the past 10 years with GE and for the past two and a half years with Current, powered by GE, an energy company within GE focused on LED, solar, storage and electric vehicle businesses. Walmart has now installed more than 1.5 million LED fixtures across more than 6,000 stores, parking lots, distribution centers and corporate offices in 10 countries. Only recently did the companies disclose that the decade-long energy initiative has reduced lighting energy consumption and reduced costs by more than $100 million.

“Energy is one of the key operating expenses that we can reduce while delivering system upgrades that improve the customer shopping experience,” according to Mark Vanderhelm, Walmart’s Vice President of Energy. “The ripple effect from these LED conversions throughout the business is truly staggering. We believe that by continuing to reduce one of our biggest operating expenses, we’re supporting future innovation and delivering on our promise of everyday low prices.”

The LED commercial lighting initiative between Walmart and GE started 10 years ago with refrigeration display lighting and has grown to include parking lot and interior lighting.  Many stores now also feature a Current technology known as Trigrain, which produces lighting that improves product visibility and enhances color vibrancy in areas like produce departments. The retailer is also moving aggressively to complete LED and controls retrofits in all of its U.S. distribution centers and pursuing a new initiative to replace all forms of overhead lighting with LED.

In addition to avoiding energy costs – Walmart has reduced energy use per square foot by more than 12% since 2010 – the reductions feed the retailer’s other sustainability goals. The LED investments are part of Walmart’s science-based emissions reduction plan aimed at meeting a goal to reduce emissions 18% by 2025 from 2015 levels. Plans to do so in its own operations rely on a combination of increased energy efficiency, sourcing of renewable energy and improvements in refrigeration systems and fleet efficiency.

As for the $100 million figure the company disclosed earlier this year, that figure speaks to the company’s scale and potential for future reductions to be extracted from a massive physical presence. Walmart operated 11,718 locations worldwide at the end of its fiscal year on Jan. 31, and those stores encompass a staggering 1,157,865,292 square feet, or the equivalent of 41.5 square miles. To put that in perspective, the enclosed selling space area that Walmart lights, heats and cools is almost double the land mass of Manhattan’s 22.8 square miles. Small changes can have a huge impact at a company Walmart’s size and the $100 million savings figure the company disclosed is likely conservative and is also only based on results from 6,000 of the company’s stores. Walmart doesn’t publicly disclose estimates regarding potential future savings and such figures are difficult to forecast. There are many variables that go into energy savings calculations, not the least of which is the price of energy from which historical energy savings are derived. The same issue exists when it comes to calculating potential future energy savings since assumptions would need to be made about the price of energy five or even 10 years into the future, a notoriously difficult task given volatility of energy prices. In addition, Walmart has to exercise restraint when calculating savings for public consumption to avoid potential criticisms that might arise about greenwashing claims.

If pinpointing actual savings is challenging, attributing lighting improvements to sales results is even harder. Intuitively, retailers know the combination of well-lit parking lots and superior product presentation improve shopper safety, overall perceptions of the store experience and contribute to sales. While the magnitude of those contributions is uncertain, Walmart’s sales results in the U.S. have shown solid improvement during the periods in which lighting upgrades have been made. Customer traffic and same store sales growth have risen for several years in a row, improvements which are also attributable to operational improvements and increased employee wages. Walmart capped its fourth quarter of 2017 with an impressive 2.6% same store sales increase at U.S. stores driven by increased customer traffic and strength in fresh categories, an area where improved quality and presentation are regularly cited as success factors.

As Walmart moves forward with its energy reduction goals it does so under the leadership of a uniquely qualified individual in Vanderhelm. He joined Walmart in 2015 to lead the team supporting the retailer’s global commitment to energy efficiency, sustainability and renewable energy. He spent the prior 11 years with Exelon Generation, an energy company focused on energy generation and development of renewable sources such as gas, solar, biomass, storage and hydro. Vanderhelm also holds a master’s degree and doctorate in nuclear engineering from MIT where he co-directed the Nuclear Power Operations’ Reactor Technology Course for Utility Executives.

About the time Vanderhelm joined Walmart, veteran GE executive Maryrose Sylvester was tapped to serve as president and CEO of the newly created organization Current, powered by GE. The new unit was billed at the time as a first-of-its-kind startup within the walls of GE focused on blending advanced LED lighting with networked sensors and software to make commercial buildings and industrial facilities more energy efficient and productive.

Sylvester, a 30-year GE veteran who previously served as President and CEO of GE Lighting, believes Walmart’s efforts to improve efficiency are setting a great example for others in the retail industry.

“We believe the global LED and controls transformation is paving the way for the next generation of smart retail, where steady advancement toward new digital solutions will continue improving the shopping experience,” Sylvester said. “Walmart is once again on the leading edge of progress.” RL