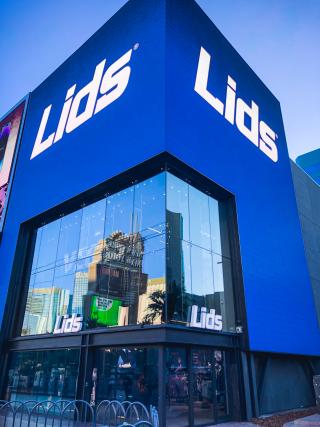 The sports merchandise retailer Lids announced the opening of its newest flagship store, located on the Las Vegas Strip, as part of its continued retail expansion.

The two-level, 12,000-square-foot space is the brand’s largest concept store to date. The store will contain more than 50,000 items for sale, including fashion and sports merchandise of local Las Vegas sports teams, according to a news release.

Autographed merchandise from professional and collegiate sports teams will also be available for purchase, and customers can have a piece of merchandise embroidered in the store’s “Custom Zone.”

"Opening our newest and largest Lids store to date in the heart of Las Vegas was an obvious choice for us as the area is a shopping destination known around the world," said Lids President Britten Maughan in the release.

The new Las Vegas flagship features several design choices not seen in its other retail locations, including a digital exterior facade, in-store shops from sports leagues, and two large LED screens that the retailer said will play prime-time sporting events. The location will also host in-store signings and other events, the company said.

Maughan, who became president of the company in September 2021, said the new store offers a glimpse into the future of the retailer’s plans as it continues to push forward on its physical retail offerings in the U.S. and across the globe. The company in 2021 expanded to Europe, opening four stores in the U.K., as Retail Leader previously reported. Earlier this year, the company announced the opening of several new locations in Germany. And in August, it opened its first retail location in Australia.

Lids has also flirted with other retail concepts — in July the retailer announced Lids University, a concept located in malls and outlets with a focus on collegiate products. The company said it planned to open at least 11 of these locations by the end of 2022 with more slated to open in 2023. The company operates other brick-and-mortar concepts, including Locker Room by Lids and team-specific stores, like its Yankees and Dodgers Clubhouses in New York and California.

Lids was acquired by the private holding company Ames Watson in 2019, and it operates over 1,500 stores, with the majority in the U.S. and Canada.