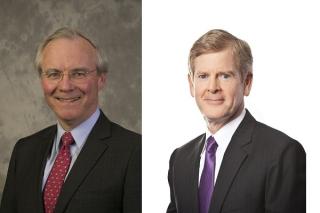 Cincinnati’s top two executives, Kroger CEO Rodney McMullen and Procter & Gamble CEO David Taylor are under pressure from competitors and activist shareholders. Here’s how they are handling it.

Kroger and Procter & Gamble, two of the retail industry’s dominant players, are facing some unfamiliar challenges these days. Kroger has seen its share price pummeled due to a wide range of mounting competitive concerns while P&G is facing a proxy battle with a well-regarded activist investor who thinks the company should be performing better.

Kroger reported second quarter results recently which saw a resumption of same store sales growth and strength in others areas such the grocery pick up service branded as ClickList. McMullin shared his thoughts on the company’s performance, the incredibly dynamic operating environment and the potential for digital acquisitions during a second quarter conference call. A transcript of what he had to say is available here and worth reading because of the detail provided that doesn’t make its way into business press headlines.

While McMullin’s challenges are related to competitors, P&G’s Taylor is facing scrutiny of another sort. Nelson Peltz, CEO and founding partner of Trian Fund Management, one of P&G’s largest shareholders, is waging a proxy fight to secure a seat on the board. Trian owns about 37.6 million shares, which sounds like a lot, but equates to only about 1.5% of P&G’s outstanding share total of nearly 2.56 billion. Peltz has created a Web site devoted to the effort, www.revitalizepg.com, and also published a 94-page document that outlines ways he thinks the $65 billion consumer products company could improve its performance. To refute Peltz’s claim, Taylor recently appeared on CNBC in an interview with Jim Cramer in which he called Petlz’s ideas “very dangerous.”