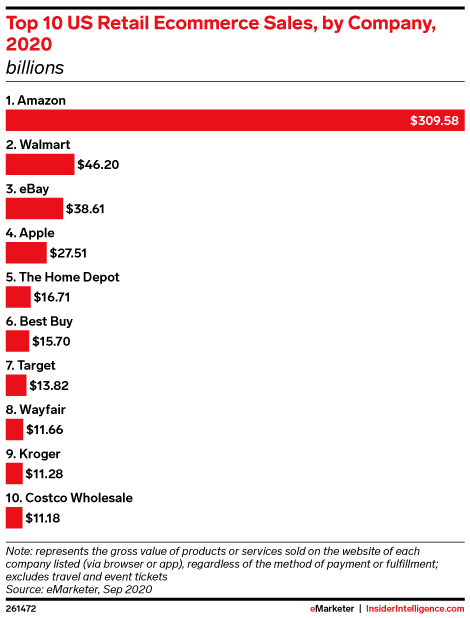 For the first time, Kroger has broken into the top 10 U.S. e-commerce retailers list as determined by eMarketer.

One of the biggest stories of this pandemic year is the rise of food retail e-commerce, and now Kroger is providing another example of that trend.

While it is notable for Kroger and other retailers to appear on the eMarketer list, it becomes increasingly difficult to distinguish physical and digital sales in this era of omnichannel commerce, especially as more merchants decline to break out e-commerce numbers, reflecting the current state of retail.

“The pandemic has shifted consumer priorities,” said Cindy Liu, eMarketer senior forecasting analyst at Insider Intelligence. “Kroger will benefit from two tailwinds this year: Eating at home continues to be in favor among Americans, and there’s been greater interest by consumers in ordering groceries online. With these two forces at play, we shouldn’t be surprised by Kroger’s strong growth this year.”

The company said that Kroger’s early digital investments have also helped the brand — and certainly prepared it for what the year had in store, she said. “Kroger started investing in online grocery several years ago, and now it has more than 2,000 pickup locations and 2,400 delivery locations that reach over 97% of its customers,” Liu said.

The pandemic has shaken up the grocery landscape, accelerating the shift to online grocery faster than we previously anticipated. Kroger had made digital investments over the years that helped it navigate 2020’s unusual circumstances.

The grocery giant will also surpass Macy’s, which held the No. 10 spot in 2019 but has since dropped out of the list. Indeed, despite U.S. retail e-commerce sales growing by more than 32% this year, Macy’s will fall out of pace with the companies in the top 10 largely due to declines in apparel sales. Because consumers are spending the majority of their time at home, many aren’t shopping for new apparel, which has ultimately impacted the department store.

Cincinnati-based Kroger employs nearly half a million associates who serve 9 million-plus customers daily through a seamless digital shopping experience and 2,757 retail food stores under a variety of banner names. The company is No. 3 on The PG 100, Progressive Grocer’s 2020 list of the top food retailers in the United States.