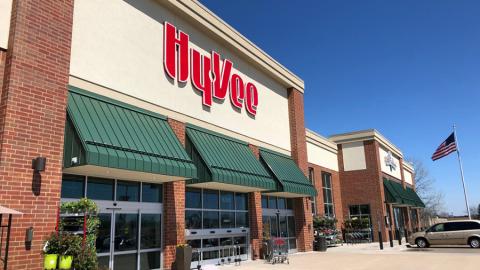 Early, aggressive and escalating describes West Des Moines, Iowa-based Hy-Vee’s response to the COVID-19 outbreak. The latest example involves implementing one-way aisles in stores and adding sneeze guards behind cashiers to those that are already in front.

The moves are the latest in a series of actions that began just days after President Trump declared a national emergency on March 13. They are even more noteworthy because they came at a time when COVID-19’s impact in Hy-Vee’s Midwest trading area was minimal.

On March 17, the company reduced store hours to improve stocking and store sanitation, closed in-store dining areas and shifted to carry-out only, modified delivery and pick-up procedures and suspended its weekly ads, something other retailers only did recently.

On March 18, Hy-Vee announced its stores would open an hour early seven days a week to serve at-risk population groups. The following day, illustrating the fluidity of the COVID-19 situation, Hy-Vee again escalated its response by prohibiting customers from bringing re-usable bags and it began the installation of temporary window panels to separate cashiers from customers.

“The spread of this virus is asking us all to take extraordinary measures and change the way we live our lives,” Randy Edeker, Hy-Vee’s chairman, CEO and president said at the time.

On March 23, the company said it would stop accepting returns because it couldn’t trace where products went after they left a store and on March 31 it began free deliveries for at risk populations.

More recently, on April 3, Hy-Vee took another major step to ensure shoppers practice social distancing. The retailer implement one way direction signage in the aisles of all of its 265 stores in eight states so shoppers avoid passing each other in aisles. The company also encouraged a one person per cart policy to help limit the number of people in stores at one time.

“We continue to implement additional ways to adapt at Hy-Vee, so that we can serve our customers and protect the health and wellness of those who work and shop in our stores,” Edeker said.

The company also said it would install additional temporary window panels on the back side of checkouts to help provide an additional layer of protection for both cashiers and customers. At this rate, the next step would be to fully encase cashiers in temporary window boxes. Sounds crazy, but so did many of the measures now being widely implemented just three weeks ago.