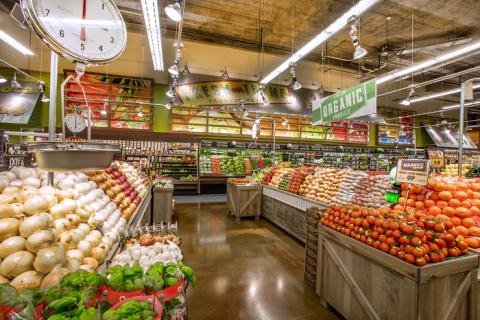 Fresh Thyme’s stores are meant to resemble a farmer’s market, with a focus on fresh organic and natural foods, and a large selection of bulk goods.

Fresh Thyme Farmers Market CEO Chris Sherrell has earned a reputation as a retail industry innovator and someone willing to go against the grain. He embraced the natural and organic movement long before traditional grocers with key roles at Wild Oats and then Sunflower Farmers Market.

Now, as CEO of Fresh Thyme, a company founded in 2014, Sherrell is taking a different approach to innovation by focusing on retail fundamentals and the pursuit of selective new initiatives designed to differentiate and facilitate the company’s growth.

The operator of 68 stores throughout the Midwest grew dramatically in 2017 with the addition of 20 new locations, fine-tuned a 320,000-sq.-ft. distribution center that came online in 2016 and filled key senior leadership roles such as chief merchandising officer and chief financial officer. Now the company is pressing the pause button on expansion with roughly 12 new stores planned for 2018 while it implements a wide range of information technology efforts that will serve as the infrastructure to drive longer term growth.

“We’re trying to build a business with a strong foundation on systems and discipline. We’ve spent a year implementing all these new systems from, auto replenishment to backdoor receiving to different category reports to our distribution software and out of stock reports,” Sherrell said. Other recent efforts have focused on a new labor standards system and an auto replenishment and inventory management system from NCR that is expected to be operational by summer. “We really want to create a sustainable business that has a great foundation of technology and systems.”

Sherrell describes himself as “a grocery systems guy,” and it’s no wonder. He started working in the grocery industry when he was just out of high school with a job at Wild Oats making $5.25 an hour. Since then he has racked up more than two decades of experience working for Wild Oats, Sunflower Farmers Market, and Fresh Thyme. During this time, Wild Oats was bought by Whole Foods in 2007, and Sunflower Farmers Market merged with Sprouts Farmers Market in 2012. He launched Fresh Thyme in 2014 after identifying an unmet need for a natural foods retailer in the Midwest that offered shoppers a healthy lifestyle at an affordable price.

“Our consumer is a lifestyle customer. They’re looking to live a lifestyle, change their lifestyle. They need education,” Sherrel said. “They need way finding, demos, samples and they need to understand what they’re doing. They need to touch, feel, taste, and really ultimately at the end of the day talk to somebody.”

To deliver on that value proposition, Fresh Thyme’s stores are meant to resemble a farmer’s market, with a focus on fresh organic and natural foods, and a large selection of bulk goods. The stores boast natural meats raised without hormones, seafood flown in daily and locally roasted organic coffee beans. Over the past year Fresh Thyme added organics to its prepared foods department launching juice and sandwich counters, and expanding its salad and olive bars and upgrading pizza ovens.

The company has also rapidly expanded its private label range introduced in 2015. The Fresh Thyme brand grew from 400 items to more than 1,000 last year as the company moves fast to jump on the latest food trends.

“Our private brand, within six to eight to 12 weeks of putting it into a category becomes the number one item in that category,” Sherrel said.

THE SIGNIFICANCE OF SIZE

At about 28,000 square feet, Fresh Thyme stores are about half the size of a typical supermarket, which Sherrel believes makes them more shopper friendly.

“We looked at size so many times. We always come back to where we are. You could make it a little smaller to fit it in some urban areas, but we don’t feel like going bigger is going to change anything at all,” Sherrel said.

Store size also simplifies site selection which is important as the company pushes eastward into more densely populated areas. The first Fresh Thyme in Pennsylvania is slated to open later this year. Fresh Thyme stores are currently located in nine states including Wisconsin, Minnesota, Michigan, Missouri, Nebraska, Indiana, Illinois, Iowa and Ohio. If the company continues expanding along the East Coast, it would consider opening another DC, but the current facility should be able to support more than 100 stores in the next few years, according to Sherrell.

A slew of operational priorities promise to keep Fresh Thyme busy this year. The company plans to ramp up grocery delivery, launch a new website and app, create an enhanced loyalty program and prioritize employee development.

“We want to create a great working environment to create a company that has ‘team’ in mind and promotes opportunity, good wages and good benefits. And we want to have a great morale and create a culture of leading, teaching, coaching, and inspiring. So that Fresh Thyme is a place that not only the consumer wants to come and shop at but is also where people want to come to work because they believe in what we’re doing, and they know that there’s great opportunity if you want it,” Sherrell said.

That mindset plays into Fresh Thyme’s value proposition as a company that values community, authenticity and sustainability in how it operates. Fresh Thyme says it’s on a mission to improve the way communities eat by constantly improving the food supply chain. It’s a narrative that connects with the increasing number of consumers who care about where their food comes from, how it’s processed, and how all of that affects the environment. Another facet to Fresh Thyme’s sustainability strategy involves getting rid of paper circulars.

“One of my goals is to get rid of circular paper fliers over the next three to five years completely and really move the business to the digital, mobile, web platforms. Whether it’s a cost initiative or a green initiative, there’s plenty of reasons I’d love to see (paper) fliers be a part of the past,” Sherrell said.

As for the future, especially where digital is concerned, Fresh Thyme is looking to roll out delivery options this summer.

“We decided to really focus on home delivery before we focused on click and collect. Part of our secret sauce is convenience. We don’t have big stores,” Sherrell said. “Yes, it would be nice for someone to click, drive up and collect some groceries, but they are in and out of our stores in 15, 20 minutes anyway. While we have not ruled out click and collect at all, we felt that home delivery was the better option to go with first.”

As the company pursues its growth strategy it has somewhat of a secret weapon in that it was founded with support from Meijer, the highly regarded operator of 230 supercenters. How much or little Fresh Thyme benefits from its Meijer relationship isn’t clear and the companies provide few details. However, what is clear is that Fresh Thyme is investing in a lot of business processes, capabilities and technology that give the company a strong foundation for growth, even if it means curtailing expansion in 2018 enroute to a goal of 150 locations by 2020.

“We’ve got huge training initiatives, huge digital and web and mobile initiatives along with getting the culture really down into the core business and so we can really set ourselves up for success,” Sherrell said. “Growing fast is one thing, growing fast and sustainable is the most important thing.” RL