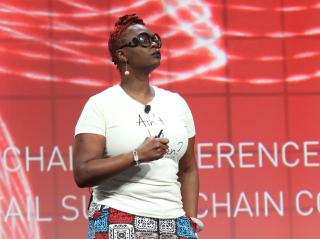 The topic of diversity and inclusion is familiar in the retail industry. It’s been talked about for decades, goals have been set and commitments are discussed in corporate social responsibility reports. Nevertheless, a quick glance around the room at any industry event, especially those geared toward senior executives, reveals a sea of homogeneity.

Within the overall industry, the lack of gender diversity is especially noticeable in the field of supply chain and logistics. Maybe that’s to be expected considering many of those in senior leadership got their start running warehouses or operating truck fleets, which weren’t particularly appealing professions for women 20 or 30 years ago. The world of supply chain has changed a lot though. It is a more data and technology driven profession, but the lack of women persists. For some context, there was no waiting to use the women’s bathroom when the Retail Industry Leaders Association (RILA) held its annual supply chain conference earlier this year in Phoenix.

If the first step toward solving a problem is recognizing one exists, then the retail supply chain world took a major step forward when RILA unleashed Caroline Wanga on attendees at its supply chain conference. Wanga serves as Target’s Chief Diversity and Inclusion Officer and she put the gender diversity issue in sharp focus for an audience of largely middle-age white executives whom she encouraged to stop worrying about self-preservation.

“Gender diversity is a business imperative that left unaddressed will render us irrelevant. We are in crisis,” Wanga said. “We are at a level of urgency related to our business staying alive by serving changing demographics.”

If that message sounds alarmist it was by design and also in sharp contrast to the normal fare at an event where conversations among attendees tend to focus more on operational matters such as port congestion, new trucking regulations or omnichannel supply chain complexities. Wanga can have those conversations too. She is a self-described “supply chain girl” who got her start in the industry at a Target distribution center in the eastern Texas town of Tyler.

“I didn’t know what the hell I was doing when I walked in that distribution center in Tyler, Texas,” Wanga said. “The point is, if Target would have allowed the fact that I was a woman to minimize my potential, to not sponsor me and not support me, I wouldn’t be in front of you today.”

Wanga spent the first five years of her 14-year Target career in the supply chain area. First in the distribution center and then at Target’s Minneapolis headquarters on the distribution, planning and engineering team focused on Target’s perishable distribution centers. She then moved into the human resources area and a series of rapid promotions led to her current role. It is a position from which she makes a forceful business case for diversity internally at Target and externally. And she minces no words when describing the business imperative, considerable risk-taking and self-sacrifice required of entrenched leaders.

“It will require things that are going to take you outside of what you comfortably have been doing for however long you have been in this business. If your path to a commitment in gender parity has connected to it an assumption of comfort, you are setting yourself up for failure,” Wanga said. “It is going to be a constant state of discomfort. It is not going to be easy, short or immediate. You might not even live to see the impact of your actions.”

Nevertheless, it is a commitment that has to be made so the retail industry can continue to serve ever changing consumer demographics. And as part of that commitment leaders need to apply the same type of metrics and performance standards used to manage other aspects of the business such as product sales or on time deliveries, according to Wanga.

“It has to become part of how you lead and run your business everyday,” Wanga said. “If you look at metrics every day on how your business is performing you should do the same thing on how you are performing on diversity recruiting and gender parity.”

Target has done that. And while the company isn’t perfect, it fares better on diversity than most of its peers. It has also become more committed than ever before, which is something borne out in numbers that show 36 percent of Target’s board members and the C-suite team are female, according to Wanga. Forty percent of Target’s supply chain leadership team is female.

Whatever path a company takes it requires adopting a view that a person’s individuality is non-negotiable. On this point, Wanga is particularly forceful because she lived through the experience with Target. A native of Kenya, she moved with her parents to Minneapolis at the age of 10. She went on to attend a small historically black college in east Texas and connected with Target when the company came on campus for a recruiting event. When she was hired, rather than become like everyone else in the organization, which she called the business case for homogeneity, Wanga retained her identity and Target is the better for it.

What that looks like for companies operating in the real world is ownership for diversity, inclusion and gender parity has to be extended beyond human resources and into the business functions, according to Wanga. Such a decentralized approach improves the prospects for success because then the business function “owns it” as part of their strategic objectives. The best way to test whether such an approach is functioning, she said, is to ask HR a question about diversity and the business a question about diversity and see if they give the same answer. Or an answer at all.

“(Diversity) is not an HR initiative. This should be a part of your business strategy. This is the thing you should be most afraid of taking your business apart,” Wanga said.

Diversity as a business continuity imperative was a theme emphasized throughout a presentation that, by design, pushed those in attendance outside their comfort zone. Some may have even felt threatened or got a sense from her remarks that for women to gain men must lose. That’s not the case at all however, as Wanga noted in response to a question, because gender parity is about everyone having an equal chance.

“One of the things I hate about the D and I (diversity and inclusion) industry is no one ever asks the straight white man what he needs and he is constantly excluded and villainized in the conversation,” Wanga said. “That’s crap and it needs to stop.” RL