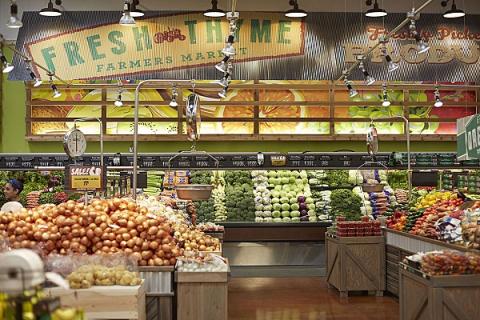 Fresh Thyme Farmers Market is set to open its 68th store in early November in the southwestern Minneapolis community of St. Louis Park. The opening caps a record year of expansion for a three-year-old retailer with a growth story often overshadowed by higher profile market developments. While Fresh Thyme has managed to fly under the national radar since launching in 2014, that situation is about to change. The company earlier this year made several key executive hires and has already identified nine new store locations for 2018 which will be supportedby a 320,000-sq.-ft. distribution center that came online in late 2016.

“What’s exciting about Fresh Thyme is that it is not relying on the center store as the cash machine anymore,” said Fresh Thyme Chief Merchandising Officer Mark Doiron. “The traditional grocer for years relied on the center store as the cash machine for the business. With the onset of the era of Amazon, Jet, Instacart, etc., there is a new value equation in the industry and for consumers. And the value equation now is really time: giving time back to busy consumers. As the center store has become commoditized, a lot of consumer research supports the fact that consumers are not looking for a long shop. People are time starved. They want time back. They want a smaller, more intimate shopping experience. Fresh Thyme is providing that experience.”

Doiron joined Fresh Thyme in May after previously serving as chief merchant at Schnuck Market. Prior to that he spent four years as chief supply chain officer at Delhaize America and 12 years in various roles at Hannaford Supermarkets including EVP of Supply Chain and Merchandising.

Both report to CEO Chris Sherrell who founded the company in 2012 and has a strong pedigree in the natural and organic food retailing space. Sherrel spent nine years in operation roles at Wild Oats prior to its acquisition by Whole Foods and served as CEO of Sunflower Markets before it was acquired by Sprouts.

“Chris Sherrell’s enthusiasm and passion for the business is infectious,” said Okamato said. “We have this core team that has been in the natural and organic business from the beginning of the industry. Fresh Thyme is the newer generation of that natural and organic segment.”

Sherrell calls Fresh Thyme the “natural and specialty food store of the future,” on the company’s Web site. He also claims, “We’re bringing a natural option to the Midwest with incredible values and trying to make the natural lifestyle affordable to the masses. “That’s really going to be our goal.”

Doiron goes beyond that to argue that the modern consumer is at a tipping point. Shoppers don’t want to shop 50,000 square foot boxes anymore, he says, and traditional grocers, which he used to be, are facing strong headwinds. It’s not just that consumers want more fresh, natural foods, it’s that they also want to shop for those foods in the quickest way possible, he says.

Fresh Thyme looks to deliver on the convenience front with smaller stores, in the range of 25,000 to 30,000 square feet. The stores are meant to resemble a farmers market, with organic and natural products, bulk items and prepared foods and a center store dominated by product that accounts for up to 30 percent of sales. The perimeter features fresh-made pizzas, a self-grinding machine for nut butters, artisanal breads, ready-to-heat meals and house-made sausages.

The other parts of the Fresh Thyme value proposition are all about location and customer service.

“The Midwest has been underserved when it comes to grocery stores that focus on natural, organics, ‘healthier eating,’ etc.,” said Doiron. “We have an intimate shopping experience. Shoppers at Fresh Thyme are more likely to be engaged by a teammate than they are at other stores. We like to think of ourselves as empowering people on their path to healthy. How are we going to do that if we don’t engage with shoppers and we don’t have people who are saying, ‘Hey, have you tried this? If you don’t like it, you bring it back.’ That’s one of our core missions, that’s the value we are offering. And you have to do that though people. They are our most important part of our value equation.”

Another aspect of the value equation is private brands. Since 2015 the company has introduced more than 400 private brand products and worked with Los Angeles-based design firm The Creative Pack to develop a private brand that reinforces Fresh Thyme’s core values of honesty, superior value, straight talk, and shopping ease. The brand also emphasizes clean ingredients and locally sourced products, sourcing from Midwest suppliers as often as possible. The line offers everyday staples such as canned tomatoes, cooking oil, gelato and attempts to stay on trend.

“One of the hottest trends in natural foods right now is avocado oil. It’s catching on really rapidly. It’s the new coconut oil. And our private label products are doing really well, in line with consumer trends buying more private brands. So we are working with different partners to produce a private brand of avocado oil.

Fresh Thyme’s aggressive expansion plans do have their challenges, however. Competitors such as Aldi, Trader Joe’s are all chasing similar customers and traditional grocers have dramatically improved their offerings of natural and organic products.

Other challenges include getting up to speed when it comes to e-commerce, delivery and store pickup. The retailer currently partners with Amazon Prime to deliver from three stores but is looking at expanding delivery to other areas.

“Company-wise our strategic priorities for the next year include efficiency,” Okamato said. “We are currently evaluating a click and collect program. You don’t want to do it unless you can do it well. These e-commerce programs change the economics of the store performance. Most stores are not set up for the efficient picking of orders. It’s hard to take a store that was designed for physical retail and flip it and make it work for e-commerce. Every retailer is evaluating how to do that and still delight the customer and still make it economical. Also we have a long way to go to get (our DC) to where we need it to be in terms of efficiency. We are also going to focus on delighting customers and getting the mix of our items right. Our strategic focus is to get everyone up to an operational excellence point because we’ve grown so fast.”

Fresh Thyme also has somewhat of a secret weapon in that it was founded with support from Meijer, the highly regarded operator of 230 supercenters. Many of those stores are located in the same states as Fresh Thyme but they are much larger, offer an extremely broad range and satisfy different shopper needs. How much or little Fresh Thyme benefits from its Meijer relationship isn’t clear and the companies provide few details.

“Our funding is from a Meijer organization, not necessarily the stores,” Okamato said. “Yes, we are connected. But we can have as much independence and autonomy as we want. We do have a board of directors that we answer to and we do have an outside board member in addition to some Meijer members.” RL