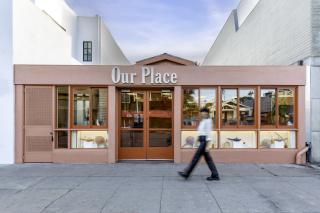 Our Place, the kitchenware brand known for its non-stick ceramic Always Pan, has opened its first physical retail location in Los Angeles.

The retailer in a Nov. 21 release said the store, located in the Venice Beach neighborhood, was designed with help from creative agency Mythology and design firm Ringo Studio. The store environment features textures, patterns and colors that intend to make the store feel like an “inviting home” for shoppers, according to the retailer. Our Place also said it’s planning to open another location in Los Angeles before the end of the year.

"When we started Our Place, we knew it was about so much more than kitchenware," said Shiza Shahid, co-founder of Our Place, in the release. "We wanted to create a place that brought people together over the joy of cooking, and now, we are able to bring everyone into this physical space to make even deeper connections. This store is truly a place by and for us and our community."

The store’s aesthetic boasts a pastel color palette accented by lime-washed plaster walls and recycled tiles in jewel tones, the release said. An arched shelving display shows off the retailer’s colorful product options. The brand’s products — like the Always Plan and the Perfect Pot — are featured throughout the store.

The store will also include a cafe — called Our Place Cafe — that will serve a variety of drinks such as tea, boba and a turmeric latte called “haldi doodh,” the release said. Shoppers can drink their beverages in the store’s backyard, which has stadium and cafe seating. The outdoor space will also host food-related gatherings and other events, like book launches and film screenings, according to Our Place.

The backyard also features a mural created by Our Place’s designer Erika Jacquez that is “tinged” with spices from indigenous and immigrant communities that have influenced cuisine and traditions globally, according to the release.

Our Place was founded in 2019. It sells its cookware directly to consumers and through wholesale partnerships, including through Nordstrom.