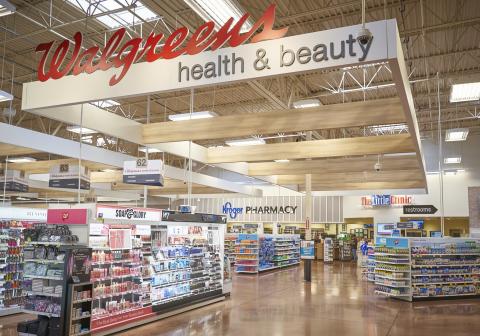 The Kroger and Walgreens combination makes a lot of sense

Now that Kroger and Walgreens have formed an unprecedented joint venture called the Retail Procurement Alliance, the obvious question is whether a merger will be the eventual outcome of their deepening relationship.

A merger between Kroger and Walgreens would be a big, but not unprecedented, deal for the retail world. The combination would result in a company with annual revenues of $257 billion, more than 12,000 stores and complementary business models that serve shoppers in very different ways and therefore could withstand regulatory scrutiny. On paper, such a deal would have many potential synergies, one of which is the premise behind the Retail Procurement Alliance. This new organization is aimed at delivering purchasing efficiencies, lower costs and combined resource to help drive innovation, according to the companies.

"This collaboration is an extension of the strategic collaboration announced last year to create value for customers and shareholders of both companies," is how Kroger CFO Gary Millerchip described it. “Kroger and Walgreens share a commitment to finding value and efficiency improvements by increasing innovation and competition through sourcing. This concept brings together the best of two great organizations to reinvent critical components of our sourcing practices."

Walgreens Boots Alliance Co-COO Alex Gourlay said the unique joint venture gives the companies an opportunity to create efficiencies across their supply chain and, “will also enhance our ability to drive innovation for customers, including both of our private-label brands, to further meet their evolving needs for value and convenience."

Aside from sweeping generalities about alignment and shared values, the companies provided no details on how the joint venture would function or be staffed. Nor were details provided as to anticipated financial benefits related to a reduced cost of goods or margin improvement, but generally speaking when retailers start talking about purchasing synergies it is not good news for suppliers.

Just the guys to do it

If a joint purchasing organization makes sense, why not a full blown merger? A deal between two of the nation’s largest – but somewhat lagging – companies would improve the prospects of competing against Walmart U.S. with sales of $332 billion and CVS Health with sales of $194.6 billion, in addition to Amazon, Aldi, Albertsons, Costco and super-regional grocers such as Publix, H-E-B and Meijer.

Surely such a scenario has been contemplated among the range of possibilities available to the companies led by CEO’s with a history of deal-making. Walgreen Boots Alliance CEO Stefano Pessina is a noted deal-maker who, as CEO of Boots Alliance, engineered the company’s sale to Walgreens five years. Meanwhile, Kroger is a company largely built through acquisitions and CEO Rodney McMullen isn’t afraid of making big bets. That behavior was illustrated most recently by the company’s 2018 deal with U.K. retailer Ocado to open 20 massive grocery fulfillment centers throughout the U.S.

Long before Ocado though, and a number of other smaller Kroger deals, it’s worth remembering a deal with many parallels that shook the retail world in 1998. That when Kroger, a $28.2 billion company, and Fred Meyer, a $14.9 billion company, joined forces to solidify their future in a food retailing world where no one had ever seen anything quite like Walmart. Its $95.4 billion U.S. division was ramping up construction of supercenters, adding food to traditional discount stores and gaining share at an unheard of rate. Walmart had also just opened a small format called Neighborhood Market that had conventional food retailers concerned, much the same way they are concerned today about Amazon’s food aspirations. It was believed at the time that Walmart would quickly scale the concept and soon operate several thousand Neighborhood Market store.

Faced with that scenario, the Kroger and Fred Meyer deal gave the combined company the scale it needed to be better compete with Walmart, especially as it related to negotiating with large CPG companies. It’s worth noting that Kroger CEO McMullen was the company’s CFO at the time and played a key role in the deal.

A similar competitive dynamic exists today but the parties to a potential merger are different with Walgreens playing the role of Fred Meyer. Kroger faces an even bigger threat from Walgreens and there is constant chatter about Amazon’s designs on food retail with its soon-to-open small format store. For Walgreens, it faces the Amazon challenge as well following its acquisition of online pharmacy Pillpack and then there’s the CVS Health powerhouse which now includes the insurer Aetna.

Faced with this scenario and taking the long view of where competition is headed, a merger between Kroger and Walgreens isn’t idle speculation. Surely such a possibility would be among the possibilities considered by two companies embarking on a procurement alliance that offers some of the benefits of an actual merger.