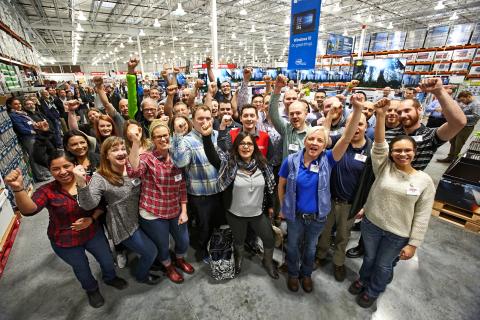 Costco achieved the milestone of operating 800 locations worldwide, with the addition of three new warehouses and a business center in October.

Amazon’s Prime Day didn’t hurt Costco’s sales in October, a month in which the opening of four warehouses let the company achieve the milestone of 800 locations.

Issaquah, Washington-based Costco said that its e-commerce sales increased 91%, U.S. same-store sales increased 16.4%, and traffic to warehouses increased 6.2%. When a company reports a 16.4% comp, pretty much every department is contributing to growth, but Costco singled out fresh food as a top performer, with a comp increase in the mid-20% range, and called out meat and produce as better-performing areas. Geographic areas with the best growth included the Northeast, the Southeast and Texas.

One headwind to overall sales growth was fuel price deflation. The company said that its average price per gallon in October was $2.35, compared with $2.96 last year. U.S. same-store sales increased 13.6% if the effect of lower fuel prices and fewer gallons sold are included in the same-store sales calculation. Costco’s total sales during October increased 15.9% to $13.8 billion

The company’s impressive gains came during a highly promotional month that included Amazon’s Prime Day promotion on Oct. 13-14, an event that prompted a competitive response from other major retailers such as Best Buy, Target and Walmart.

The other notable development for Costco in November was that it achieved the milestone of operating 800 locations worldwide by adding four locations in the United States. Among the openings were a new warehouse in Cherry Hill, New Jersey, and a business center in San Jose, California.

Costco also opened its third location in the greater Boise, Idaho, area, in the town of Meridian. Also, it continued to penetrate smaller markets by opening a location in Champaign, Illinois, after opening its first central Illinois location in East Peoria in 2012.