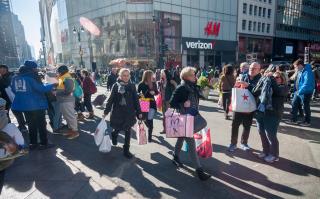 Consumers are concerned about economic conditions and pressures but still plan to spend this holiday season, according to new research from the National Retail Federation (NRF).

Holiday sales are expected to grow by as much as 8% this year, with even larger growth in the e-commerce category, NRF said. E-commerce sales are expected to grow between 10%-12% this holiday season, according to NRF forecasts. Despite similar levels of concern about the economy among consumers as during the Great Recession in 2009, consumers don’t appear poised to alter their habits as they did during that period.

In total, consumers estimate they’ll spend around $833 on holiday shopping this year, which is on par with the amount spent over the past decade, according to an NRF and Prosper Insights & Analytics consumer holiday survey conducted in October. The survey found that consumers of varying incomes had different plans, however, with high-income consumers spending more than last year and low- to middle-income consumers planning to spend fewer dollars than in 2021.

Retailers across the board started holiday sales early this year, with retailers like Walmart, Target and Amazon offering holiday sales events starting in October. The majority of shoppers who planned to shop before November said they planned to do so to spread out their spending, while other consumers said they did so to avoid the stress of last-minute shopping, avoid crowds, take advantage of pricing and promotions, and avoid missing items.

“Almost regardless of what’s going on in the economy, consumers want to celebrate holidays,” said Katherin Cullen, the senior director of industry and consumer insights at NRF, in a release. “They want to give gifts to their loved ones, and they want to make this time of year feel special.”