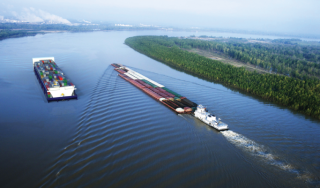 When Maynard “Sandy” Sanders took the job as executive director of Plaquemines Port Harbor and Terminal District four years ago, he figured on staying two years. The former U.S. Army General had previously served as Deputy Port Director for the Port of Corpus Christi and figured the executive director role at Plaquemines would lead to a similar role at a larger port. Things didn’t work out that way.

“My vision has morphed from what I started off doing to what I’m doing now,” Sanders said. “What I’m doing now is building a gulf gateway and transportation hub to the heartland of America.”

To understand Sanders’ vision requires understanding Plaquemines’ unique location as Louisiana’s largest and southernmost parish. About 70 percent of the parish is water and it includes the approximately 100 mile stretch of the Mississippi river that extends south from New Orleans to the Gulf of Mexico. The Plaquemines Port is between mile 50 and 55 on the west bank of the river and currently is used primarily for petrochemcials and bulk goods. Earlier this year, Sanders and a group called American Patriot Holdings revealed an ambitious plan to turn Plaquemines unique location and available land into an intermodal facility able to handle containerized goods including refrigerated and frozen cargo.

“We’re building a new, modern technology port from the ground up where berthing depths exceed 60 feet and with the capability to accommodate the larger Post-Panamax vessels coming through the widened and deepened Panama Canal,” Sanders said. “Cargo owners and ocean carriers alike should look at the planned port as a solution to their logistic problems and the high intermodal costs that plague them today. Cargo flows through the most efficient economical route and our plans are to provide shorter dwell times, lowest cost, with fast and reliable routes.”

The new port, comprised of 4,200 acres, will include a recently announced $8.5 billion Liquefied Natural Gas re-liquefaction facility, a break bulk terminal and a 1,000 acre container terminal capable of servicing the largest ocean carriers.

The linchpin to the port’s viability is a new type of container vessel capable of plying the Mississippi river faster and with larger cargoes of containerized goods than the current system of barges lashed together and pushed by tugboats.

“The new vessel is going to revolutionize the onward movement of cargo via waterborne means and strengthens the inland waterway system,” Sanders said.

The vessel features a patented exoskeleton hull design that maximizes the loading of shipping containers. A patented bow design developed by American Patriot Holdings and naval architect Naviform Consulting & Research enables the vessel to travel at speeds up to 13 miles per hour while producing minimal wake. That means a round trip from Plaquemines to Memphis will take seven days and roundtrip to St. Louis will take 11 days. Once in those inland ports good can be transported to other distribution methods or travel further upriver. The vessels run on liquefied natural gas and will have a high level of electrical capacity for frozen and refrigerate cargos. A unique propulsion system means they are capable of docking themselves as opposed to relying on tugboats to nudge them into berths.

The speed advantage is the thing that stands out because a barge and tugboat system makes four or five miles per hour at best, according to Sal Litrico, CEO of American Patriot Container Transport (APCT), a wholly owned subsidiary of American Patriot Holdings (APH). In addition to speed, the exoskeleton vessel with its containerized cargo hauling design brings the efficiency of maritime loading and unloading practices to inland waterways.

What happens next with the Plaquemines Port’s development will depend on cargo owners such as retailers and CPG companies. They will need to have confidence that the port vision is achievable and they will realize greater distribution efficiencies into the nation’s heartland.

“Most logisticians will gladly trade longer transit times for lower delivered cost if that transportation is reliable and dependable,” Sanders said. “But we can’t get ahead of our pocket book. We have to have commitments for cargo because cargo is king. You can’t do anything if you don’t have cargo commitments.”

Once commitments are obtained, construction of vessels can also begin. In September, model testing of the vessel is scheduled to take place in Germany that will validate claims about speed, limited wake and shallow drafting. If all goes well, as Litrico expects it will, then plans call for an initial fleet of four ships with the first vessel available in about two years and three others coming online about four months apart. Longer term plans call for a fleet size of between 9 and 12 vessels in three sizes. The workhorse of the fleet is expected to be the mid-range size that measures 772 feet long and 100 feet wide with a capacity of 2,392 TEUs, or 20 foot equivalent units, a measure of cargo capacity used to describe a common container. By comparison, a typical barge can accommodate 40 TEUs but when connected to other barges it forms a barge train with greater TEU capacity.

Sanders also envisions using a nearby naval air station for commercial purposes, which will help the base increase its overall utilization rate and avoid Base Realignment and Closure (BRAC), or what Sanders said those in the military refer to as, “getting BRACed.” The base is Louisiana’s third largest employer and Sander’s plan calls for creating an industrial park near the end of a runway that leads to highway 23 and points north. Nearby rail lines also need to be extended for the port to deliver on its intermodal aspirations.

It is a grand vision that faces plenty of obstacles, but the massive project has several things going for it. The most obvious is the business case for shippers who stand to gain a more efficient means of getting goods into the nation’s heartland reliably and cheaply. It also helps that the federal government is actively encouraging industry to increase usage of inland waterways for the distribution of goods. Passage of the Energy Independence and Security Act of 2007 that created the Marine Highway Program has as one of its goals the reduction of truck traffic on highways.

The other thing the Plaquemines Port has going for it is that Sanders is leading the effort. The U.S. military is known for producing logisticians and Sanders spent 32 years in the Army helping move personnel and equipment around the world. The Mobile, Ala. native graduated from the United States Military Academy at West Point and has a masters degree in strategy from the United States Army War College. As a Brigadier General, he served as the Deputy Commander for mobilization for the Military Surface Deployment and Distribution Command in Fort Eustis, Virginia and as the Director of the Central Command Deployment Distribution Operations Center in Kuwait. As a member of the Senior Executive Services he served as the Director of Defense Energy Supply Center at Fort Belvoir Virginia. His last military assignment, he served as the Deputy G4 for U.S. Army Reserve Component Integration, Army Headquarters in the Pentagon as a Major General.

It is the type of leadership background and skill set that promises to serve the Plaquemines Port well as it looks to establish an intermodal facility that will have logistics leaders rethinking their supply chains.

“We are starting this from nothing. All I have right now is potential,” Sanders said. “However, in 10 years, this thing is going to completely revolutionize the Gulf Coast.” RL