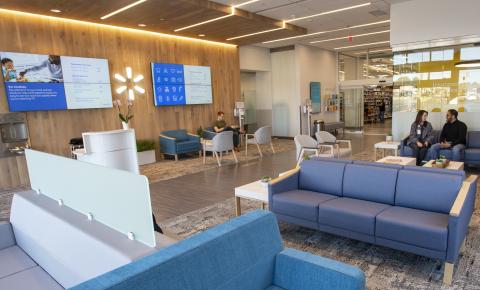 The future of healthcare delivery in the United States, an aspect of it certainly, can be seen 60 miles northwest of Atlanta. That’s where Walmart opened a medical facility that someday may be looked back on by healthcare providers the way once dismissive food retailers looked back at Walmart’s early efforts with supercenters.

Adjacent to a recently remodeled supercenter in Calhoun, Ga., Walmart opened what it is describing as a state-of-the-art health center. The facility opened Jan. 29, and offers primary and urgent care, labs, x-ray and diagnostics, counseling, dental, optical and hearing services. What separates the approach from just about every healthcare experience anywhere else is that pricing is transparent, regardless of a patient’s insurance status.

“We think we can make an impactful difference in affordability, convenience and, most importantly, accessibility for the Calhoun community,” said Sean Slovenski, SVP and President of Walmart U.S. Health and Wellness. “We have a history of launching innovative products and programs that have transformed the industry and created significant healthcare savings for customers. Now, we’re focused on a solution to provide affordable integrated care that our customers want and deserve.”

The “history” Slovenski referenced includes Walmart’s introduction of $4 pricing on a 30 day supply of generic drugs in 2006. The flat rate pricing program, later expanded to include $10 pricing for a 90 day supply, had a huge impact on the pharmacy world. Competitors who saw market share evaporating quickly introduced their own variation of discount programs, including some who provided a select group of medicines for free. However, another history lesson is potentially more instructive when it comes to understanding where Walmart might take things with its new approach to healthcare delivery.

The Calhoun center is the second of its type Walmart has opened. The first opened in Dallas, Ga., last fall and is also northwest of Atlanta. Will either facility prove economically viable? It’s hard to say right now. But remember, Walmart’s early hypermarkets that opened in the late 1980s weren’t viable either. They did however give way to supercenters, which proved to be incredibly viable and caused tremendous disruption in food retailing. Before Amazon came along, Walmart’s supercenters were the most disruptive retail phenomenon the U.S. market had seen.

Their expansion potential has diminished greatly the past five years since there are now more than 3,500 locations. Walmart can continue to gain share in the food retailing world, but a company its size with more than $500 billion in revenue needs to enter huge markets to move the needle on sales. The healthcare world is just such a market if Walmart can get the operating model right, or perhaps invent a new one.

Walmart already has solid footing in the healthcare world through its network of pharmacies and optical centers. It isn’t much of a stretch to believe that those same communities where Walmart is dispensing medicine and improving eyesight would be receptive to a more comprehensive offering of health care services. Especially if they are offered at transparent and reasonable prices. The healthcare world is going to be hearing and seeing a lot from Walmart in the coming decade, even if the concept going forward doesn’t exactly resemble the two locations now open northwest of Atlanta.