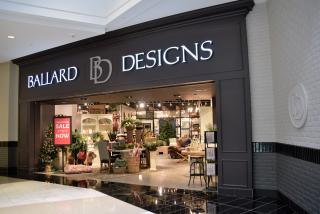 Furniture and home decor retailer Ballard Designs is partnering with Carson Kressley ahead of the retailer’s 40th anniversary next year.

Ballard Designs said it would partner with Kressley, the television personality and designer who rose to fame when he appeared on the original Bravo “Queer Eye for the Straight Guy” series, to redesign two entertaining spaces in his Pennsylvania farmhouse. Kressley and the retailer will post updates about the collaboration through their social media channels, according to a press release.

The spaces in Kressley’s Pennsylvania home will be revamped to feature furniture and decor from Ballard Designs. Since Kressley appeared on “Queer Eye,” he’s continued to be a popular fixture on reality television, including on his 2018 Bravo interior design show “Get A Room With Carson and Thom.”

“We're thrilled to partner with Carson, as we feel he and his design style embody what we're all about here at Ballard Designs – and that's using the home as a canvas for self-expression and individual creativity,” said Karen Mooney, president of Ballard Designs, in a release. "Together, we are able to showcase a prime example of how our home furnishings and decor can help anyone create a home and hosting space they're both comfortable in and proud of."

Retailers like Ballard frequently turn to television-famous personalities for partnerships in an effort to boost their brands. PetSmart also this week announced a partnership with the designers Nate Berkus and Jeremiah Brent to launch a stylish line of pet furniture. Since 2017, Target has collaborated with Magnolia, the home furnishings brand created by the HGTV-famous couple Chip and Joanna Gaines.

Ballard Designs in September opened its first-ever design studio in West Palm Beach, Florida. The 2,500-square-foot location marked the seventh physical retail store for the brand. The new location was a departure from its existing stores, featuring a smaller footprint focused on allowing customers to design and customize products with on-site design consultants rather than allowing them to bring home most products the same day.