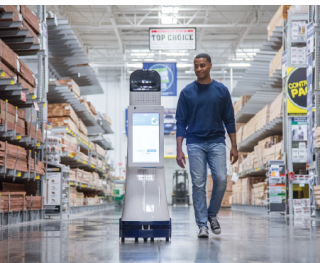 Robots aren’t what they use to be. They are a lot better and capable of performing a wide range of tasks that require concentration, repetition, accuracy and speed. In other words, a lot of the things that humans aren’t very good at or don’t particularly like doing.

The field of retail robotics promises to grow exponentially in the coming years as operators look to control labor costs, improve efficiency and leverage technology in new ways. The industry’s reliance on low-skilled, hourly workers makes it a prime candidate for increased automation and the inevitable displacement of workers. This is a tricky issue for retailers, especially those who are expanding, and like to tout job creation and opportunity for advancement as a benefit of joining the company. Even when technology is leveraged in ways that lead to the elimination of roles — think self-checkout — job loss concerns are defused with claims that the increased use of technology allows labor hours to be deployed to customer service functions.

“When we launched OSHbot, our goal was to assist our employees — and help free them up to work with more customers,” Kyle Nel, the retailer’s Vice President of Disruptive Innovation and Executive Director of Lowe’s Innovation Labs, said when LoweBot was launched. “Just like smartphones are designed to augment, not replace, people, we believe robots can play a similar role. When we talked to the folks at the Orchard store who worked with OSHbot, we heard just that — stories about how the robot helped them spend more time with customers.”

Rather than being displaced by robots, the opportunity to work alongside robots is now positioned by some retailers as a benefit. Amazon employs that recruitment strategy when it announces locations for new fulfillment centers — something it has done about two dozen times this year. At a new 855,000-square-foot fulfillment center in Staten Island, N.Y., the company said this: “The facility is Amazon’s first fulfillment center in the state and will create more than 2,250 new, full-time jobs with opportunities for employees to engage with advanced robotics. Amazon employees at the Staten Island fulfillment center will work alongside robotics to pick, pack and ship customer items such as household essentials, books and toys.”

The company used similar language in August when it announced plans for a fulfillment center in North Randall, Ohio, it said would create 2,000 full time jobs with benefits, “and opportunities to engage with Amazon Robotics in a highly technological workplace.”

Amazon was an early adopter of robotics and it continues to look for new advancements by hosting a robotics challenge. This year, the four-day contest was held in conjuction with RoboCup, a major technology event and robot competition in Nagoya, Japan. Amazon awarded $270,000 in prize money to competitors whose robots performed supply chain tasks with winners determined based on how many items their robots could pick and stow in a fixed amount of time.

“The versatility of recognition capabilities in an unstructured environment and the dexterity of grasping mechanisms was truly impressive,” said Joey Durham, Chairperson for competition and Manager of Research and Advance Development for Amazon Robotics.

The supply chain has long been a place of automation with advanced material handling systems eliminating the need for armies of workers moving boxes and palletized goods. The advent of e-commerce created new supply chain challenges that were met by robotic solutions. Amazon recognized the shift early and moved to acquire robotic systems manufacturer Kiva Systems in 2012. The company was renamed Amazon Robotics in 2015 and today the company has more than 100,000 of the robotic drive units zipping around 25 fulfillment centers worldwide to bring bins of goods to workers.

While Amazon is viewed as the most advanced, other solutions exist to make workers more efficient. Former Kiva executives Jerome Dubois and Rylan Hamilton launched a company called 6 River Systems that manufactures a self driving cart named Chuck that leads warehouse workers to bin locations to pick items for new orders or to restock returned items.

Fetch Robotics is another company with a robot designed to aid, rather than replace, warehouse workers performing e-commerce fulfillment tasks.

“We don’t want to replace people. We just want to make them more efficient because our studies show that 70% of time is spent transporting after picking,” said Norm Williams, director of sales with Fetch Robotics based in San Jose, Calif.

Conversely, one company whose value proposition is focused squarely on replacing people is Knightscope. The company, founded in 2013, manufactures autonomous data machines used to patrol inside or outside a store or mall. The company is looking to tap a global security market it values at $300 billion with two models; the K3 stands four feet tall and weighs 340 pounds and the K5 is five feet tall and weighs 398 pounds. A four-wheel model called the K7 suitable for uneven outdoor surfaces is also under development. The company has 44 machines under contract with 32 clients as of mid-September but plans expects to have an installed base of 100 units by year end. The value proposition for a retailer — mall developer Westfield is a client — is the hourly operational rate of $7 an hour versus $25 for a human security guard, according to the company.

“Knightscope continues to build the foundation for delivering on our vision of making the United States of America the safest country in the world, changing everything for everyone,” Knightscope’s Chairman and CEO, William Santana, said ahead of the ASIS International trade show for the security industry.

The company used the event to unveil its “security team of the future,” a collection of four machines that employ lasers, ultrasonic sensors, inertial measurement unit (IMU), wheel encoders and collect massive amounts of data. Each unit can generate one to two terabytes of data per week and over 90 terabytes of data per year, which is accessible for review and analysis.

The Knightscope robots perform a serious function and their stubby torpedo shape is a less than menacing form factor. The same can’t be said of some of the advanced robots coming from Google-owned Boston Dynamics. Its sophisticated robots are capable of walking on uneven ground, running up and down stairs and effortlessly hoisting 100 pound packages of the floor, which could come in handy for retailers looking to minimize workers comp claims. However, the company’s robots, with names like Atlas, Wildcat and Big Dog resemble contraptions from science fiction in which plot lines always seen put humans in jeopardy.

Conjuring negative images of robots is easy to do because it taps into a range of human fears, stereotypes and uncertainty about the future. Consider the title of Martin Ford’s 2015 book, “Rise of the robots, technology and the threat of a jobless future.” In it he imagines a world without work and a range of generally negative consequences. Notable visionaries, from Bill Gates, Stephen Hawking and Elon Musk, take things a step further with warnings about artificial intelligence, especially when applied to autonomous weapons systems capable of identifying and eliminating targets. Applied to the retail industry, systems capable of identifying and performing tasks are viewed with less concern because of anticipated productivity improvements.

The automation of activities can enable businesses to improve performance by reducing errors and improving quality and speed, and in some cases achieving outcomes that go beyond human capabilities, according to a report from McKinsey Global Institute titled, “A future that works: Automation, employment, and productivity.” The firm argues that every occupation has the potential for partial automation.

“We estimate that about half of all the activities people are paid to do in the world’s workforce could potentially be automated by adapting currently demonstrated technologies. That amounts to almost $15 trillion in wages,” according to McKinsey. “The activities most susceptible to automation are physical ones in highly structured and predictable environments, as well as data collection and processing. In the United States, these activities make up 51 percent of activities in the economy, accounting for almost $2.7 trillion in wages. They are most prevalent in manufacturing, accommodation and food service, and retail trade.”

If robots are about to eliminate millions of jobs, humans don’t seem concerned. Only 14% of U.S. employees fear losing their job to automation and one third of workers believe automation will make their jobs better, according to a survey from the U.S. division of Randstad, a global human resources service provider. The findings released in the summer of 2017 are part of the Randstad Employer Brand Research survey of 5,300 U.S. residents.

“It is evident from our research that not only are workers not afraid of losing their jobs to automation, they are more than willing to retrain to leverage the efficiencies and benefits of artificial intelligence and robotics in the workplace,” said Linda Galipeau, CEO Randstad North America. “These sentiments should be welcome news for companies as they seek greater adoption of automation to drive productivity and innovation. As we have known for quite some time, the success of organizations in the future will depend greatly on their ability to strike a balance between valuable human insight and interaction with technology.”

Randstadt also found that U.S. companies are enthusiastic about the potential benefits of automation and AI on their business, with 31 percent of employer respondents indicating increased usage of automation and robotics in the past 12 months. A clear majority (84%) of U.S. respondents say they believe AI and robotics will have a positive impact on the workplace in the next three to five years, according to Randstadt.

“As business leaders invest in digitization, automation, AI and other emerging technologies in the workplace, they must continue to evolve their workforce alongside these advancements,” Galipeau said. “While the productivity and efficiency benefits of automation are unequivocal, the need for skilled humans to operate, utilize and advance technologies is equally unmistakable.”

Just asked orchestra conductor Andrea Colombini. He stood by in September as a dual arm robot from ABB, a Zurich-based technology and industrial automation company, conducted Italian tenor Andrea Bocelli and the Lucca Philharmonic Orchestra at the Teatro Verdi in Pisa, Italy. The robot, named YuMi, showed a very high level of fluidity of gesture, with an incredible softness of touch and expressive nuancing, according to Colombini.

“This is an incredible step forward, given the rigidity of gestures by previous robots,” Colombini said.