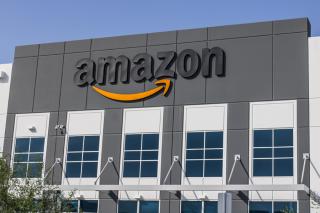 Some lawmakers want marketplace operators to better police their sites.

Amazon has started a fresh push against online sales of counterfeit goods, filling a lawsuit in recent days against a marketplace seller accused of peddling fake Valentino Garavani Rockstud shoes.

The lawsuit comes as U.S. lawmakers and federal agencies try to crack down on the online sale of counterfeit retail goods — and as Amazon CEO Jeff Bezos and his peers at Facebook and Google face mounting pressure from Congress over antitrust concerns.

Amazon “shut down Kaitlyn Pan’s seller account in September 2019,” the online marketplace operator said. “Despite multiple notices of infringement and a cease and desist order, Kaitlyn Pan continues to import, distribute, sell, and offer infringing products on (its website). Kaitlyn Pan further attempted to apply for a US trademark for its infringing Valentino Garavani Rockstud shoes, flagrantly and willfully disregarding Valentino’s intellectual property.”

As for Amazon, the online retailer said that “in line with Amazon’s past joint litigation, Valentino will receive any proceeds from this suit. Amazon strictly prohibits counterfeit products and, in 2019 alone, invested more than $500 million and had more than 8,000 employees protecting its store from fraud and abuse, including counterfeiting and IP infringing products.”

Counterfeiting has always been a problem in retail, and that holds true in the world of e-commerce, notably via online marketplaces.

Amazon may boast of its anti-counterfeiting efforts — the company also said that “99.9% of all products viewed by customers on Amazon have not received a valid counterfeit complaint” — but the company has faced regular criticism for not policing marketplace sales enough to stop counterfeit sales. Similar complaints have targeted China-based Alibaba and other operators, though other retailers — including Walmart — tend to have better reputations when it comes to policing their online marketplaces.

According to one estimate, Amazon operates the third-largest online marketplace in the world, behind China’s Taobao and Tmall. Amazon easily leads the U.S. online marketplace pack. Some $200 billion worth of goods moved through the Amazon marketplace in 2019. Amazon’s most recent marketplace efforts have involved getting more small- and medium-sized businesses to use the platform and its associated fulfillment services.

Globally, retail counterfeiting is an industry worth at least $200 billion annually, according to the Organization for Economic Cooperation and Development.

“E-commerce platforms are not currently liable for counterfeit goods sold through their websites,” reads one analysis of that bill. The proposed law, which has bipartisan support. would require marketplace operators to do more seller verification and work more closely with law enforcement, among other steps. The Trump Administration also has launched its own anti-counterfeiting effort, though that does not appear to have yet made much progress.

Online counterfeiters, of course, often have the skill to jump from marketplace to marketplace, a step or two ahead of corporate security and other authorities. Knock-off luxury goods are a big source of that illicit revenue but the problem applies to countless products, including lower-cost ones. In short, the fight will continue no matter what, though new tools or laws can at least make it a bit harder for those counterfeiters to operate — and, perhaps more importantly, make life easier for honest sellers who don’t have to worry about tarnished reputations or other problems caused by the trade in fake retail products.

“The vast majority of sellers in our store are honest entrepreneurs but we do not hesitate to take aggressive action to protect customers, brands, and our store from counterfeiters,” said Dharmesh Mehta, Amazon’s vice president, customer trust and partner support. “Amazon and Valentino are holding this company accountable in a court of law and we appreciate Valentino’s collaboration throughout this investigation.”