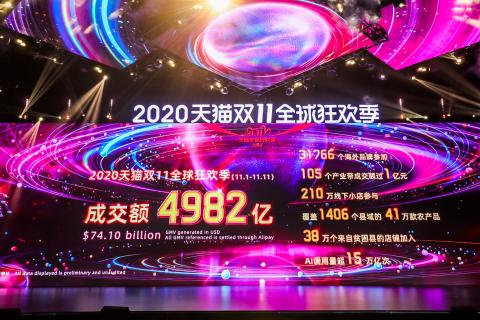 Amazon’s Prime Day and the competitive promotional activity it triggered in mid-October was significant, but it pales in comparison to the new sales record Alibaba just set with its 11.11 Global Shopping Festival.

The Chinese e-commerce, payments, cloud computing and logistics company said gross merchandise volume increased 26% to $74.1 billion during the eleven day promotional event which ended on November 11. The sales event began 12 years ago and was initially known as Singles Day in China.

“Over the past 12 years, innovation has been at the heart of 11.11 and along the way it became a global consumer festival. 11.11 is defined by our consumers, merchants and our partners across the ecosystem, and also a beneficiary of all the support from society,” said Jiang Fan, President of Taobao and Tmall, two of Alibaba’s e-commerce platforms. “We will continue to focus on developing our digital infrastructure in the service of empowering merchants of all sizes to find a path to success in the digital economy.”

The company said roughly 250,000 brands participated in 11.11, with 31,000 of those being brands outside of China. The United States was the top country selling to China by gross merchandise value with other top-selling countries including Australia, Canada, France, Germany, Italy, Japan, Korea, New Zealand and UK.

The company said more than 470 brands achieved more than $15 million in gross merchandise volume, which it contends showcases the value creation of digital transformation across the Alibaba Digital Economy. At the peak of order volume, Alibaba said its digital infrastructure handled 583,000 orders per second and its Cainiao supply chain network processed more than 2.32 billion delivery orders cumulatively over the 11-day period. Livestreaming also served as an important marketing tool with more than 30 livestreaming channels that each generated more than $15 million in gross merchandise value, according to Alibaba.

The 11.11 Global Shopping Festival began in 2009 with participation from just 27 merchants as an event for merchants and consumers to raise awareness about the value of online shopping.