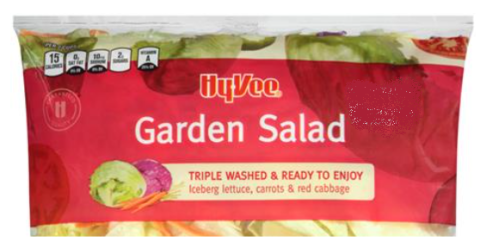 The Food and Drug Administration said it is working with Hy-Vee, Aldi and the Jewel-Osco division of Albertsons to determine sourcing of store brand garden salads following 76 reported illnesses and 16 hospitalizations.

"The U.S. Food and Drug Administration, along with the Centers for Disease Control and Prevention and state and local partners, have likely linked a new outbreak of illnesses caused by Cyclospora to certain store brand 'garden salad mix' products from Hy-Vee, Aldi and Jewel-Osco, predominantly in Midwestern states,” said Frank Yiannis, FDA’s deputy commissioner for food policy and response. "The FDA is working with the companies to determine the source of the products, but in the meantime, we are issuing a public warning to consumers to avoid the identified products to prevent additional infections."

The outbreak is potentially linked to Aldi’s Little Salad Bar brand garden salad, Hy-Vee brand Garden Salad and Signature Farms brand garden salad from Jewel-Osco. Although the investigation is ongoing, CDC’s analysis of epidemiologic information indicates that the bagged salads containing iceberg lettuce, red cabbage and carrots from the three retailers are a likely cause of the illnesses, according to an FDA statement.

The regulatory body also cautioned in a statement on Friday, June 19 that its investigation is in the beginning stages and there may be additional retailers and products impacted by the outbreak.

"While there is no widely available method to DNA-fingerprint Cyclospora, the epidemiologic investigation has identified grocery stores and products linked to illnesses caused by this parasite,” Yiannis said.

Cyclospora is generally transmitted when infected feces contaminate food or water and FDA cautions that people should be aware that rinsing or washing food is not likely to remove it. When people eat food or drink water that’s contaminated with Cyclospora, they can get an intestinal illness called cyclosporiasis, but it usually takes about one week to get sick and then the symptoms are quite unpleasant.

According to FDA, Cyclospora infects the small intestine and usually causes watery diarrhea, with frequent, sometimes explosive, bowel movements. Other common symptoms include loss of appetite, weight loss, stomach cramps/pain, bloating, increased gas, nausea, and fatigue. People may also experience vomiting, body aches, headache, low-grade fever, and other flu-like symptoms, according to FDA. If not treated, the illness may last from a few days to a month or longer and then if symptoms do go away they may return one or more times.

Past cyclosporiasis outbreaks in the U.S. have been linked to raspberries, basil, cilantro, snow peas and mesclun lettuce.