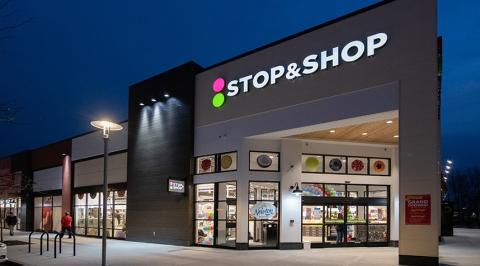 The timing of 65 planned Stop & Shop store remodeling projects will be affected by COVID-19.

Ahold Delhaize increased online sales expectations for its U.S. stores and said it would accelerate omnichannel investments after reporting first quarter results that were heavily impacted by COVID-19.

Same store sales at Ahold Delhaize USA increased 13.8% during the first quarter, aided by a 33.8% comp increase in March and 42.3% online growth throughout the quarter. Those figures are comparable to results reported by other food retailers who were trending well at the start of the year before experiencing an unprecedented sales surge around mid-March that was then followed by a shift toward digital shopping methods as social distancing took hold.

Given the huge change in shopper behavior, Ahold Delhaize USA now expects its online sales growth in 2020 to exceed 50% after previously sharing a target of 30% growth. To accommodate new shopper behaviors, the company this year will accelerate rollout of click and collect points to more than 1,000 of its nearly 2,000 U.S. stores operating under banners such as Food Lion, Stop & Shop, Hannaford, Giant and Martins. The company ended the first quarter with 707 click and collect locations, up slightly from the 692 locations at the end of its last fiscal year.

"Clearly, our Q1 sales performance across all geographies was impacted by the unprecedented demand and pressures created by the COVID-19 outbreak,” said Frans Muller, president and CEO of Ahold Delhaize. “We have responded by implementing additional safety and protective measures, enhancing associate pay and benefits, and making charitable donations to support local communities. The costs related to our efforts will more significantly impact subsequent quarters. Nevertheless, we maintain our full-year outlook that our group underlying operating margin will be broadly in line with 2019.”

While some of the capital expenditure projects the company had planned will be delayed, such as the timing of remodeling activity at 65 Stop & Shop stores, investments in digital and omnichannel capabilities are being accelerated by an unspecified amount.

The company also said it remained committed to paying its dividend and buying back shares, two areas under scrutiny at companies operating in other sectors of the economy where liquidity is larger issue. However, the company did qualify its commitment slightly by noting, “given the uncertainty caused by COVID-19, we will continue to monitor macroeconomic developments.”

Uncertainty was a recurring theme in the company’s commentary, as it has been for all types of retailers, many of whom have stopped providing financial guidance. Ahold didn’t go that far, but said it will be closely monitoring and learning from changes in consumer shopping patterns and behavior.

“While it is still too early to know which paradigm shifts will emerge from the COVID-19 crisis, we continue to prioritize investments in accelerating our digital and omnichannel capabilities, as well as improving our store fleet, in order to grow our share of wallet,” the company said in a statement.

Other retailers have been more definitive in their outlook on the behavioral changes expected to result from COVID-19, projecting that the pandemic will prove to be a major catalyst to accelerate the shift to digital shopping methods that was already underway.